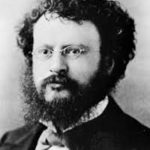 “The greatest things that man has done, he owes to the painful sense of incompleteness of his destiny.” – Madame de Stael (novelist 1766-1817).

In the last six posts we have reviewed speculations on human destiny by an anthropologist (Richard Leakey), biologist (George Gaylord Simpson), physical scientist (Fred Kohler), and cosmologist (Fred Hoyle). Leakey seems the most pessimistic – man is unlikely to evolve within culture and may cause his own extinction sooner or become extinct naturally later, although he notes the average species naturally endures for some 12 million years in which case man would have tremendous time. The other three are more optimistic seeing human evolution leading to increased social integration and knowledge, and shared or universal consciousness. Next we will look at the predictions of three great historians.

The first is John Fiske who was a historian1, philosopher, and librarian at Harvard in the 19th century. His comments predate the two World Wars and perhaps seem naïve given that later history. Much of his work builds on the philosophy that came out of Darwinism, especially that of Herbert Spencer. In his short book, The Destiny of Man,2 he begins by reviewing the science of evolution as it was understood in his time. Man appears to him to be the ultimate outcome of a God-directed evolution, making him what Simpson calls a finalist3 (he is also a Christian).

He finds it “impossible that any creature zoologically distinct from man and superior to him should ever exist upon the earth.”4 In his opinion “the most essential feature of man is his improvableness.”5 Evolution now involves the perfecting of humanity especially through psychical (mental) development.  His summary of human history is a three phase advance from empires conquering without incorporating the defeated, to empires conquering with assimilation of the defeated, to the final stage of non-violent federation of nations. In the future, strife leading to warfare will become extinct, and humans will evolve higher levels of kindness, sympathy, justice, and intelligence – giving new meaning to Christ’s prediction, “The meek will inherit the earth.”6

Death for humans will be followed by an afterlife of the permanent spiritual element of man. Death he believes, like Euripides, is the “dawning of true knowledge and of true life.”7 He concludes “The future is lighted for us with the radiant colors of hope. Strife and sorrow shall disappear. Peace and love shall reign supreme. The dream of the poets, the lessons of priest and prophet, the inspiration of the Great Musician, is confirmed in the light of modern knowledge.”8

Fiske’s prediction of the evolution of kindness and enhanced intelligence in humans and a future of peace on earth sounds Pollyannish and may be derived from his faith more than his study of history, but it remains a refreshing point of view of our destiny. Perhaps the 20th and early 21st centuries were mere oscillations in the story of man’s painfully slow growth as a species. We can only hope that evolution of kindness, justice, and intelligence occurs before man destroys himself and the planet.

1Historical works include: The Critical Period of American History, The Beginnings of New England, The War of Independence, The Discovery and American Conquest of America, Civil Government in the United States, and New France and New England.