“The tidy anthropocentric proscenium of our ancestors has been replaced by a cold, immense, indifferent Universe in which humans are relegated to obscurity. But I see the emergence in our consciousness of a Universe of a magnificence, and an intricate, elegant order far beyond anything our ancestors imagined.” – Carl Sagan. 1 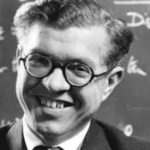 In the middle of the 20th century, there was still a vigorous debate regarding the nature of the cosmos. On one side was the Belgian priest and physicist, Georges LeMaitre, who thought Edwin Hubble’s finding of the accelerating expansion of the universe indicated its origin in the explosion of a primordial atom and on the other, a British astronomer, Fred Hoyle, who argued the universe is maintained by a continuous creation of new matter. In a radio broadcast on the BBC, Hoyle sarcastically and unwittingly gave LeMaitre’s theory a name which stuck – the Big Bang.2 The rest is history.

But don’t be misled: Hoyle was a serious scientist, the author of the theory of stellar nucleosynthesis.3 In any case, he published a book based on those BBC broadcasts that summarized cosmology as understood at the time. The last chapter of that book, his personal view of the future, is the subject of this blog.

Hoyle is careful to preface his remarks by noting there is no agreement among scientists on the future and emphasizing the views as his own. Starting with astronomy, he does not predict a dramatic change in the understanding of the universe over the near term and even thinks there is a possibility that astronomy will regress as it did after the Greeks; not because of an apocalypse, but because of an “increasing tendency to rivet scientific inquiry in fetters.”4

He rejects materialist or deterministic theories and there is no connection between life (an accidental machine) and the universe as a whole. He argues materialists leave consciousness unexplained and can’t account for the existence of the universe. History has proven that scientific inquiry eventually explains the apparently unexplainable.

He also rejects theological accounts as illusions and sees no advantage to self-deception. He is intrigued by the mystery of the human mind and predicts that in the future it should be possible to determine the physical relationships between mind and body. He believes the greatest lesson of his adult life is that one’s own consciousness in not enough. We all would choose to share consciousness with great individuals like Shakespeare, Mozart, or Gauss. He postulates “an evolution of life whereby the essence of each of us becomes welded together into some vastly larger and more potent structure, I think such a dynamic evolution would be more in keeping with the grandeur of the physical Universe than the static picture offered by formal religion.”5 His hope appears to be based on an earlier observation: no fictional or imaginary description of the Universe is as fantastic as the reality uncovered by astronomical science. Perhaps integrated consciousness will become another fantastic and unexpected actuality.

2Hoyle, Fred, The Nature of the Universe. Harper & Brothers, New York, 1950. Page 124. He writes: “Some people have argued that continuous creation introduces a new assumption into science – and a very startling assumption at that. Now I do not agree that continuous creation is an additional assumption. It is certainly a new hypothesis, but it only replaces a hypothesis that lies concealed in the older theories, which assume, as I have said before, that the whole of the matter in the Universe was created in one big bang at a particular time in the remote past. On scientific grounds this big bang assumption is much the less palatable of the two.”  Interestingly theories of the multiverse seem to require a steady creation of matter at that higher level.

3 Hoyle also had some odd beliefs including panspermia, wherein aliens supposedly seeded hospitable planets with life and were thus responsible for life on Earth.