“In the psycho-analytical theory of the mind, we take it for granted that the course of mental processes is automatically regulated by the pleasure-principle; that is to say, we believe that any given process originates in an unpleasant state of tension and thereupon determines for itself such a path that its ultimate issue coincides with a relaxation of this tension, i.e. with avoidance of “pain” or the production of pleasure..” – Sigmund Freud, Beyond the Pleasure Principle (1920). 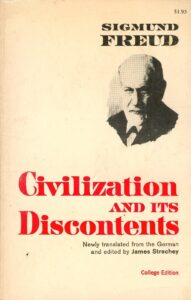 In our quest for perspectives on contentment, the last of the later thinkers I offer for consideration is Sigmund Freud (1856-1939). Second perhaps only to Schopenhauer in his pessimism, Freud moved from psychology to philosophy with his late essay Civilization and Its Discontents (1929). While the general theme of this work is social criticism and an attack on religion as deception, the first two sections (of eight) describe his analysis of contentment and happiness for the individual and are thus the focus of our interest. In addition his concerns about religiosity serve as pre-emptive arguments against the contentment that we will discuss in the next section on the encounter with ultimate reality, the fourth component of a fully meaningful life.

In the first of the two parts he starts with the assertion that all religion is an illusion, but frets over the fact that a close and respected friend thinks this is not inconsistent with personal religiosity demonstrated by the nearly universal “oceanic feeling” experienced by people. Freud himself has never had that feeling and struggles to find a psychological explanation for it. He considers whether it is a type of connection with the world, but has doubts because in his study of human psychology, the ego learns the opposite as it grows, that is, to detach itself from the pain of the outside world. He also dispenses with the idea that it is love for another which can be explained by his psychoanalytical theories. He does not relinquish his doubt that the “oceanic feeling” is religious in origin since, for him, religion appears to result from the frail adult striving for the security of a primordial or supernatural father figure.  He also challenges its authenticity as Yogi’s can elicit similar sensations through their practices. 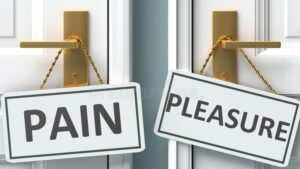 Nevertheless in the second part Freud demonstrates an unexpected level of intellectual integrity in trying to identify, by the process of elimination, possible sources of happiness and contentment once religion and spirituality are eliminated. He starts with the preliminary position that “Life as we find it is too hard for us; it entails too much pain, too many disappointments, impossible tasks.”1 As a result we default to one or more of three alternatives: (1) diversionary activities, (2) substitute gratifications, and (3) intoxicating substances.2 Regarding the first, Freud notes that religion historically offered purpose to human life, but by his time this function is being served more often by Science and Art, thus self-immersion in them answers two human needs that of purpose and that of distraction from life’s discomforts.  Meanwhile since most people cannot achieve contentment in this manner, they attempt gratification via the pleasure principle – i.e. by maximizing pleasure and minimizing pain – but find this is in conflict with the world. Moreover pleasure comes mainly from the relief of unmet needs and so can provide, at most, only temporary satisfaction.

2Freud himself was reportedly a cocaine addict.