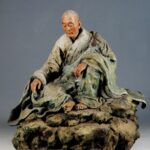 “While living one sits up and lies not,

When dead, one lies and sits not;

A set of ill-smelling skeleton!

What is the use of toiling and moiling so?.” – Hui-neng1

Before we move on from Zen, I thought we might look further into its conception of contentment from the perspective of the famous 20th century Japanese philosopher, Daisetz T. Suzuki. We met him earlier in the sections on Teleology2 and Suffering,3 but today I would like to extract from one of his essays a fairly contemporary viewpoint addressed to the Westerner on the Zen concept of contentment. His essay Satori, or Enlightenment begins:

“The essence of Zen Buddhism consists in acquiring a new viewpoint on life and things generally…we must forgo all our ordinary habits of thinking which control our everyday life, we must try to see if there is any other way of judging things, or rather if our ordinary way is always sufficient to give us the ultimate satisfaction of our spiritual needs. If we feel dissatisfied somehow with this life, if there is something in our ordinary way of living that deprives us of freedom in its most sanctified sense, we must endeavor to find a way somewhere which gives us a sense of finality and contentment.”4 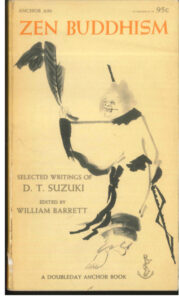 I have read no more apropos a description of the goal of this section of my website than Suzuki’s. Let’s follow his thoughts on how Zen can help us through the contentment labyrinth. He starts with a warning: this is “the greatest mental cataclysm one can go through with in life…no easy task…a kind of fiery baptism.” 5  Its central tenet is satori, that is, the intuitive (not logical or analytical) looking into the nature of things which unveis a new non-dualist or unified world and remakes life in a way that stays with one thereafter.

According to Suzuki, satori is not quietism like Tao, nor a trance-like wasting of life as in other Eastern traditions, but a seeing into one’s life and one’s own Nature. He tells us the sixth patriarch Hui-neng denied sartori arises out of stopping all mental activities and sitting cross-legged for a sustained period of time, and, in fact, scorned such practices.6 On the contrary Zen masters encourage the seizing of the most trivial incidents in life to make the mind flow and to open up new vistas. During such moments, one’s attention must be directed inwardly to the working of the mind. No one, not even a Zen master, can bring one to the final state; all they can do is indicate the way and leave it to each individual to find his or her way. At the end of the day, this state of contentment comes down to finding oneself (as if one lost oneself through neglect) or the “returning to one’s own home.”7