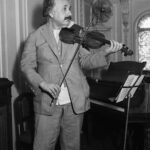 Last time we looked at whether mathematics corresponds to absolute truth; today we investigate mathematics as a tool of science particularly as the substructure of scientific certainty. Nowadays we see math as so integral to science that we might think they developed in lockstep, but that is not the case. Mathematics likely started as counting possessions such as fingers, children, goats, or coins; followed by the geometry necessary for land measurement and construction. At that time, science was predominantly observational – e.g. identification of the constellations and planets and the four ancient elements of earth, water, air, and fire – or speculative as in the case of Democritus’ atomism. 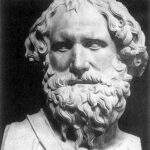 But successors failed to follow up on their insights, so in fact the greatest scientist of the ancient world, Aristotle, studied zoology and botany only by observation and description; while its greatest mathematician, Archimedes, took mathematics much further, but mostly for technology rather than for the analysis of nature.

Successive cultures in Rome, Arabia, India, and even medieval Europe advanced in pure and applied mathematics, but failed to identify its utility in elucidating nature. That seems to appear suddenly in the works of Copernicus, Kepler, and particularly Galileo who rejected scholastic views of knowledge and subjected observational and experimental data to mathematical analysis in formulating theories. Arguably their insight that mathematics can explain data was their greatest contribution to science and one of the great feats of humanity. Newton, Pascal, Lavoisier, Faraday, Einstein and countless others followed, all using mathematics as the knife by which to dissect out the hidden structure of reality.

Thereafter  for centuries, mathematics and science grew in parallel without impediment until coming up against two fundamental challenges. First, mathematics itself showed defects as outlined in the last blog. Second, in the desire for solid foundations for scientific theories, mathematics was overstretched to fit some theories, and increasingly modified or invented merely to permit models of nature that transcend any experience of reality at all. It is this latter trend in the relationship of science to mathematics that is most disconcerting with respect to its certainty. Next time we will look at some important examples including (1) chaos theory and complex systems, (2) quantum mechanics, uncertainty, and the spontaneous appearance of matter, and (3) string theory.