“When philosophy is regarded in the light of a series of abstract systems, it can be said to concern itself with two fundamental questions: first, the question ‘what there is’; and second, the question how ‘what there is’ may be explained.”– Kwame Nkrumah, Consciencism. 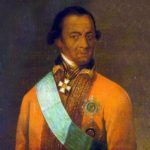 After the introduction and his arguments regarding authentic African philosophy, Hountondji analyzes two African-born philosophers. The first is Anton-Wilhelm Amo an 18th century Ghanian who went to Europe at age four likely to be trained as a preacher. He ended up a master of philosophy in 1730 and taught for at least ten years and wrote at least four philosophical treatises. He eventually moved back to Ghana where the last record of him was a meeting in 1753 with David Henri Gallandet, a Dutch physicist and ship’s doctor, who found him living as a hermit with the reputation as a soothsayer.

Hountondji critiques Amo’s Dissertatio de humanae mentis apatheia (On the Impassivity of the Human Mind) where Amo argues the mind is neither the seat of sensation or the faculty of sensation (a passive function) consistent with the human mind as active, insensible, and free of passion, like the divine mind. But the human mind turns sensation into ideas which are only the mediative knowledge of things, representations, or reactivated sensations. This leads to an ironic difference in kind, not simply degree, from divine spirit whose impassivity is a perfection, whose thinking is creation, whose understanding of reality is direct. Non-passivity of spirit becomes a ‘transvaluation’ on passage from God to man.

But when Hountondji asks what in this work is African, his answer is nothing. Written in Latin for Europeans with no African audience or partners, Amo is the victim of the painful isolation of his historical situation. In the end, his works are instructive as demonstrating the need to “put an end once and for all to the monstrous extraversion of our [African] theoretical discourse…”1 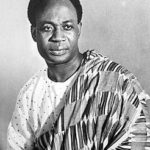 Hountondji’s second example is Kwame Nkrumah, a contemporary American-trained philosopher, who became the political leader of Ghana. His works are mainly political philosophy focused on anti-colonialism and pan-Africanism. In his youth he embraced the non-violent approach of Ghandi and the politics of socialism, arguing that traditionally Africa society had the form of egalitarian communalism; therefore the movement to socialism would be smooth and without class struggle. Over time he came to see overturning neocolonialism, imperialism, and class inequality required armed resistance.

In his most famous work, Consciencism, Nkrumah sees philosophy as the instrument of ideology. He espouses a materialist metaphysic – the priority of matter which generates mind through a ‘categorical conversion’- defined as a process through which a given reality generates a reality of higher category. God, if he exists, is then a higher form of matter. From this metaphysic, he develops an egalitarian and humanistic ethic strongly influenced by Kant, and a political ideology of self-determination and socialism – all of which are closely interlocked and form a collective philosophy for all of Africa.

Hountondji criticizes this so-called Nkrumaism at several levels. First the metaphysic itself seems implausible. Second political justifications need to be political and economic rather than metaphysical. Third Hountondji denies the possibility of a collective African philosophy – rather sees a pluralistic debate and dialogue in conjunction with science as the best course for African philosophy.

Hountondji closes his amazing book with a reiteration of his key points: African philosophy must be based on (1) true internal pluralism, not a supposed primitive unanimity or an acculturation, (2) free dialogue,  (3) living rather than studying African culture, and (4) placement in the terrain of science. I suspect he would agree that in fact these principles apply to philosophy everywhere even if it took the experience of Africans to demonstrate them to the rest of us.