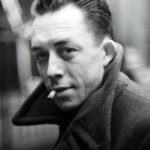 “This absurd godless world is, then, peopled with men who think clearly and have ceased to hope. And I have not yet spoken of the most absurd character, who is the creator.”– Albert Camus. Absurd Creation.

Last time we saw that the very special laws of physics that apply to our universe can be interpreted as evidence that neither the universe nor life (including humanity) qualify as absurd. Today we will look at the subjective experience of the absurdity of human life through the eyes of Albert Camus. In his  essays that make up The Myth of Sisyphus, Camus reviews the ancient Greek myth of Sisyphus who was condemned by the Olympian Gods to spend all eternity in fruitless labor rolling a rock up a mountain only to have it roll back down each time he nears the peak. Camus uses this myth as an analogy for our individual lives.

He sees this absurdity at several levels:

2)   There is an inconsistency in human rationality versus an indifferent universe.

3)   There is no congruence between human values and reality.

4)   Man is isolated as an evaluative and purposive being in a world that affords no support for this attitude.

5)   Absurdity is born of increasingly impersonal, abstract, scientific view of the world.

6)   Human understanding does not lead to satisfaction. 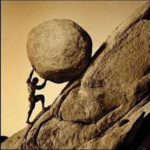 Camus believes absurdity leads man to despair or nihilism, and entertains the pessimistic response of  suicide. He eliminates that option on the basis that suicide deals with only one pole of absurdity, the human, while ignoring the cosmic pole. Instead human pride impels us to live in spite of our absurdity. It is life, not truth that really counts. Like Sisyphus, we have two options: devotion to our task or defiance of our situation. Both can lead to meaning, that is, life is its own meaning. Only insofar as we are engaged in our own lives do they make sense.

Camus concludes nihilism provides no principle of action. Rather he settles on a positive ethic – not a metaphysical revolt – wherein each of us becomes guarantor of our values in the face of the indifference of the universe. His attitude to life becomes a stubborn moral integrity and deep sympathy with his fellow men. 1,2