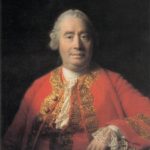 In man’s phenomenologic experience of the world,  one  question  inevitably arises: Why? Or perhaps more accurately, why is this object here or why does that event occur? By trial and error and observation, the infant and child learn that things and events appear to have causes, though of course this is a human projection of an idea onto reality. There is no metaphysical reason that things and events should require an explanation; rather this emerges from the human mind. Metaphysics might allow that things and events simply are, but of course, empirically, causation is confirmed over and over in virtually every aspect of life.

Aristotle identifies four dimensions of the causes of things: (1) material – its make up, (2) formal – i.e. the form it takes, (3) efficient – the process by which the thing or event comes to be, and (4) final cause –the end or purpose of the thing. So a house has wood and bricks as its material cause;  a blueprint as its formal cause; the construction crew as its efficient cause; and the need for a home and shelter as its final cause.  In nature, the final cause is usually closely related to formal cause and is the least apparent compared to human creations.

Francis Bacon, the first major philosopher of science, believes that the study of final causes is inappropriate in physics, and later thinking increasingly moves away from all but efficient cause which is reworked as the mechanical explanations of things – dependent only on matter and motion, especially motion producing motion, instantiated in the principle of cause and effect. David Hume, the great 18th century Scottish philosopher, argues somewhat convincingly that we cannot prove cause and effect, rather it is an illusion imposed on reality by human assumptions after repeated observation of similar events in ‘constant conjunction’  – for example the movement of a billiard ball following contact by another moving billiard ball. Nevertheless Hume argues for causation in nature and denies that anything happens by chance or that anything can be uncaused.

The mathematical predictability of mechanics in physics starting with Galileo and Newton and the elegant explanations of changes in biologic organisms described first by Charles Darwin and A.W. Russell seemed to verify the mechanical explanation of reality. Different fields of science converge on the simple and secure principle: events in nature are caused. The reluctant corollary: since man is part of nature, then his actions too must be caused. But is this conclusion inconsistent with free will? Next time we will look closer at the classic arguments.