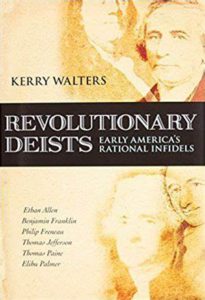 “All that we see, about, abroad,

What is it but nature’s God?

No less than in the starry sphere…

His system fix’d on general laws

Bespeaks a wise creating cause;

And all on this globe we find.

– Philip Freneau, On the Universality and Other Attributes of the God of Nature.

In addition to philosophy, I have tremendous interest in the American Revolution, so what good luck when on my recent trip to Michigan I came across this book at Black River Books in South Haven. The author, Kerry Walters, is the William Bittinger Chair of Philosophy at Gettysburg College. He is author or editor of more than twenty books with intriguing titles such as Atheism: A Guide for the Perplexed.

Deism, he tells us, is a religious worldview which sprang from the Enlightenment’s emphasis on reason, natural philosophy (science), and experience. Its central tenants are: 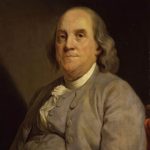 Deists considered the Christianity of the time as pernicious in its avowal of the utter corruptibility of man, encouragement of intolerance, persecution of dissent, hampering of scientific progress, and obstruction to social justice. At the political level, deists were strict republicans who believed in freedom of religion and of the press, universal education, and separation of church and state. They denounced slavery, the abuse of Native Americans, and the subjugation of women and sought to reform institutions that bred intolerance.1

Clearly deist thinking was incorporated into the political philosophy of early America and the Declaration of Independence and U.S. Constitution, both of which inspired other nations. Their defense of the oppressed seems surprisingly fresh 250 years later. But of course deism declined in the following century; next time we will examine why and explore its legacy further.