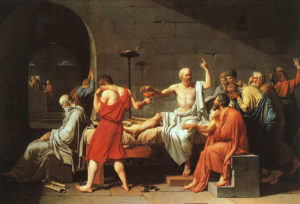 “…fearing death gentlemen is nothing other than thinking one is wise when one isn’t, since it’s thinking one knows what one doesn’t know. I mean no one knows whether death may not be the greatest of all goods for people.” – Socrates, in Plato’s Dialogue, Apology.

Last time I argued that the decision to ignore eventual death appears to be an unacceptable approach to death while existential anxiety is the summit of human experience of the force of life – making these the antipodes of human postures on death. Today I wish to unpack the main points in the last 19 posts, and see if that anxiety actually makes sense.

We learned that biological mortality is nature’s price for evolution of complex organisms as it is both intrinsic to muticellularity and essential for the development of future species. Eternal existence is neither empirically demonstrable nor metaphysically possible for man, the latter because real and subjective existence are contingent rather than necessary. Traditional concepts of immortality and the afterlife are logically inconsistent, undesirable, or impersonal. Alternatively, mortality offers important benefits for the individual: release from suffering, a focal point for life, immense freedom, finite limits on duty, and a comfortable historicity. Death also serves humanity and the universe, particularly as the greatest value of any given living thing is its exhaustion in the propulsion of nature.

But the existentialist’s belief that nature and the universe are indifferent or hostile to man seems to me unwarranted. Of all living things of which we are aware, man seems to get the closest to immortality, if nothing else by participation in the eternal through the knowledge of cosmic time and necessary being. But we also saw that man achieves a variety of forms of immortality: (1) physical – the recycling of our material bodies; the enduring nature of mental energy, and the chain of causation which follow on our actions, (2) metaphorically – in our offspring, our impacts on other humans, and our enduring works, and (3) transcendentally – in infinite present moments, persistence within our frame of being, participation in space-time, and perhaps ‘eternal recurrence.’

It turns out that the only eternal manifestations of the universe are its subatomic building blocks interchangeable with energy, and the universe itself – the infinitesimal and the whole. No other subpart of the universe, not man, (not even a demiurge if there is one) can claim eternal individual existence on a cosmic time scale; but man, at least, participates in both of these manifestations – as composed of the infinitesimal eternal parts and integral to the chain of causation, biology, and space-time that infuse the universe; combined with awareness of that participation.

To me, there are two implications of these ruminations:

1.    Death and the end of individual existence are unavoidable, so prepare for it. 2.   Universal being is eternal, so embrace it.

At least, two philosophers have looked at deeply at these implications, and we will see what they discovered in the next two blogs.