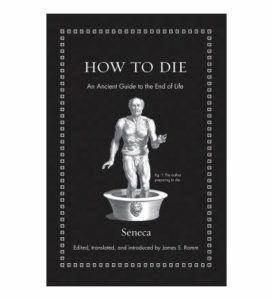 “The whole life of philosophers…is simply a preparation for death.” – Cicero

Last time I proposed that on reflection existential anxiety is unfounded as, man as a physical being shares with all things greater than subatomic particles and less than the universe as a whole the quality of transience, but uniquely participates in eternity through human understanding.  One consequence of this is man unlike other creatures can prepare for his eventual nonexistence. Today we will look more closely at the preparation for death especially as transmitted to us through the letters of Seneca.

In his book How to Die, James S. Romm reconfigures relevant passages in Seneca’s letters into a manual of sorts describing the Stoic approach to death. I found quite revealing his introduction which alludes to a scientific study where patients administered hallucinogenic mushrooms reported they “stared directly at death…in a kind of dress rehearsal,” and found the experience not “morbid or terrifying but liberating and affirmative.” 1 This seems to confirm that existential anxiety is a ‘peak experience’ and even the entry point for the ultimate life experience and can be mollified by confronting it.

He begins with Seneca quoting Epicurus: “Rehearse to die…it’s a great thing to learn how to die.”2 He tells his friend Lucilius that he has already experienced death – the time before he was born, and that death is no worse. Pity for the dead is as absurd as pity for the unborn. Fear of death not only makes dying more difficult, but life less noble. He scoffs at the fear and avoidance of death, “Whoever doesn’t want to die, doesn’t want to live.”3 He even calls it madness, “..fear is for things we’re unsure of; certainties are merely awaited.”4