“Either we have an immortal soul, or we have not. If we have not, we are beasts, the first and wisest of beasts it may be; but still beasts.” – Samuel Taylor Coleridge 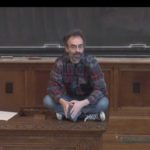 Again we find ourselves looking at whether something traditionally accepted as axiomatic can be proven by incontrovertible argument. Unlike the case of the existence of God, formal proofs of existence of the soul are wanting. In his lectures on the Philosophy of Death,1 Shelly Kagan has three very poignant lectures that address a general argument for the soul and its refutation in some detail. The reader will benefit greatly by watching those videos, but I will summarize the line of that debate in this blog.

In theory, since an immaterial soul cannot be confirmed by the senses, the argument for its existence must be based on an ‘inference to the best explanation.’ As humans appear to have characteristics unlike other material entities in the universe such as life, emotions, creativity, consciousness, and free will, there must be an explanation for them. Materialist explanations appear to be inadequate or incomplete, and even dedicated monists agree that science does not fully explain human experiences of love, imagination, self-awareness, deliberative choice, and so forth. The dualist asserts this gap may be closed by positing a human soul, in which case the question really is how good the soul is as an explanation of these features.

Kagan demonstrates that some human characteristic such as emotions and creativity appear to be duplicated by existing or fictional machines or computers and hence should be excluded. In theory since machines are programmed by humans, it is really human free will the dualist claims is beyond explanation. He rephrases this as a tentative proof of the soul:

2.  Nothing subject to determinism has free will.

3.  All purely physical systems are subject to determinism.

Kagan denies this proof is philosophically sound as all three of the premises are debatable and it therefore fails to prove the necessity of a human soul. Moreover Kagan argues a theoretical soul also fails as an inference to the best explanation of exceptional human features because it does very little to elucidate them, particularly since believers in the soul can offer no details of how the soul works.