Last time I presented a summary of a conversation on God between Warren Heisenberg, Wolfgang Pauli, and Paul Dirac. Continuing now, Weisenberg goes on to tell us that he relates this discussion to Niels Bohr who then defends Dirac’s position, quoting Wittgenstein “whereof one cannot speak thereof one must be silent.”3 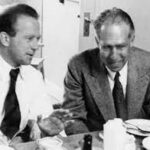 Bohr adds that he finds a personal God a foreign idea, but concedes that religion uses language more like poetry than like science. Nonetheless, in Bohr’s opinion, religion should use the same criteria for truth as science when referring to objective facts and he feels the line between subjective and objective aspects of reality is increasingly blurred with the advances in physics, particularly relativity and quantum theories. But Bohr seems to propose a middle ground:

“…even in our future encounters with reality we shall have to distinguish between the objective and the subjective side, to make a division between the two. But the location of the separation may depend on the way things are looked at; to a certain extent it can be chosen at will. Hence I can quite understand why we cannot speak about the content of religion in an objectifying language. The fact that different religions try to express this content in quite distinct spiritual forms is no real objection. Perhaps we ought to look upon these different forms as complementary descriptions which though they exclude one another, are needed to convey the rich possibilities flowing from man’s relationship with the central order.”4

Bohr clarifies his position on the complementarity of scientific and religious, or design descriptions of events with the example of biology. In the case of the healing of an organism, the finalistic explanation – repair of a wound – has a complementary explanation based on physico-chemical laws. The explanations are mutually exclusive, but not contradictory. The same can be applied to our understanding of consciousness or free will and subatomic physics.

We are left with several considerations from Heisenberg’s confrontation between 20th century science and religion. Einstein’s equating of God and ‘central order’ is palatable to even dedicated physicalists. The objective and subjective aspects of ultimate reality in the world of physics is blurring, but there remains room for complementary interpretations that combine into the fullest understanding available at this time in human history. As Bohr tells Heisenberg, “I believe that if the development of atomic physics has taught us anything, it is that we must learn to think more subtly than in the past.”5