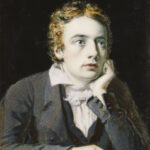 “The only way to strengthen one’s intellect is to make up one’s mind about nothing…Be passive and receptive…The poetic nature has no self. It is everything and nothing…A poet has no identity…he is continually in and filling some other body.” – John Keats1

In thinking through Eastern philosophy’s guidance on achieving contentment, we have looked at Hindu, ancient Buddhist, and Daoist thought-leaders. From the Upanishads and Patanjali we learn contentment is found in withdrawal, recognition of the spiritual as true reality, and calming the mind by meditation and breath control. Buddha encourages renunciation, conduct in harmony with community, and deep contemplation of key truths particularly that suffering in life is due to desire and that self is an illusion. The Daoists advise disentanglement from the world, material simplicity, ordering of the mind, and a life of quietude and natural spontaneity.

Today I would like to examine a fourth school of Asian thought, Zen Buddhism. While nominally a form of Mahayana Buddhism, this mainly Japanese philosophy developed first in China under Huineng (637-713) and was later introduced into Japan. Zen, meaning meditation, represents a blending of Buddhist and Daoist thought further shaped by Japanese culture. Zen follows traditional Buddhism in the belief in reincarnation and release as satori or enlightenment. However satori is achieved not gradually by meditation (dhyana) and environmental withdrawal as in original Buddhism, but suddenly by meditation in contact with nature, especially under the watchful eye of a master.

Zen masters urge training in a rigorous practice of za-zem (meditation-sitting) and contemplation of one or another philosophical riddle or koan (e.g “What is the sound of one hand clapping?”). They may also use secular arts such as archery or the tea ceremony for spiritual training.2 The goal is illumination and liberated contentment based on a deep understanding of reality. From there it gets quite complicated, but is worth the effort to untangle. 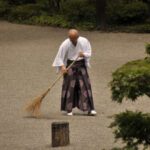 Zen, it turns out, is not a philosophy or a religion, but a way of life, with two key components. First one must learn to live in the present moment rather than focus on future plans, expectations, or worries. One important element for this is work, especially some form of manual labor which forces one into the present moment. Zen so it seems is less about intellectual speculation and more about doing. However physical work must be paired with “training in the experience of seeing directly into the complete self in the fullness of the experienced moment without the mediation of intellect”3 including complete control and regulation of the body and breathing to bring thought, emotions and volition under control. The successful practitioner becomes focused on making “the most of the present moment finding therein the wholeness of self and completeness of life.”4