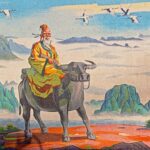 “There is no greater curse than the lack of contentment. No greater sin than the desire for possession. Therefore he who is contented with contentment shall always be content.” – Laozi

So far we have looked at two Indian traditions for counsel on achieving contentment in life – the Hindu and the Buddhist. Those philosophies intertwine contentment with the achievement of enlightenment and release from the cycle of reincarnation. We move now to China and Daoist philosophy which is more naturalistic and earthbound especially in its acceptance of human mortality.

The first and greatest Daoist of whom we have knowledge is Laozi (formerly spelt Lao Tzu or Laotse), reputed author of the Daodejing, whom I discussed in some detail in an earlier section.1  A painfully abbreviated description of his teachings follows, but the reader will find far greater consolation in reading this surprisingly short work than I can offer in summarizing it. According to Laozi, the ultimate force in the cosmos is Dao, an undefinable universal order of reality manifested in a binary realm of opposites (yin and yang). Dao, he suggests, is the source of human freedom, serenity, and longevity. These are realized through inaction and non-intervention which define ideal conduct in the world. Power is found in wu-wei, meaning effortless action and virtuosity, which is brought about by paring oneself down to the level of nature rather than by the acquisition of wealth or skills. One who lives in unity with nature, maintaining humility, shunning ambition, and embracing material simplicity may achieve the tranquility of the sage. A contented life then is simple and unregulated allowing things to perfect themselves naturally. 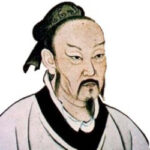 The second great Daoist is Zhuangzi (formerly spelt Chuangtse or Chuang Tzu) who is a more prolific writer, and seemingly less mystic and more intellectual than Laozi. Both speak of “the virtue of quiescence, of keeping and preserving one’s spiritual power through tranquility and rest.”2 and both use water as the symbol of tranquility of the mind and spiritual calm. Zhuangzi tells us “When the body is kept hustling about without stop, it becomes fatigued. When the mind is overworked without stop, it becomes worried, and worry causes exhaustion. The nature of water is that it becomes clear when left alone, and becomes still when left undisturbed…it is the symbol of heavenly virtue.”3

How does Zhuangzi recommend we free ourselves of hustle, worry, and fatigue?  In one word – disentanglement:  “To attend to things which are not worth attending to is no escape. Those who wish to escape living for their bodies should not attend to business affairs. Those who do not attend to business affairs have no entanglements. Disentanglement means calm and repose; calm and repose mean the beginning of the new life, and when one begins a new life he comes near to Tao…By forsaking business affairs, one’s body is relieved from worry, and by abandoning life, one’s spirit is preserved whole. When a man’s body is at ease, and his spirit is recovered, he becomes One with heaven.”4