Last time we looked at four concepts antagonistic to contentment: anxiety, dread, fear, and unease. In general these are emotional states. I would like now to address four states that seem more empirical: suffering, want, dissatisfaction, and absurdity. The difference between these groupings and within them is subtle with significant overlap, but the items in the second group are experienced as originating externally or perhaps mentally, rather than organically. 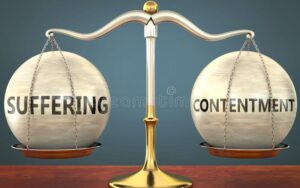 Active suffering appears, and is in fact, a potent obstacle to contentment, but as I observed in an earlier section devoted to suffering, it need not prevent happiness or meaning, or by extension, contentment. Suffering is not unusual, but universal, and to be expected in simply existing; and yet many individuals such as Laozi and Buddha found contentment within the nexus of human suffering 1  Moreover we know that asceticism, a kind of self-imposed suffering, can be deployed for achieving tranquility and final peace.2 We will examine this in more detail in later blogs.

Similar arguments apply to human wants or desires. The overcoming of desire and the limiting of wants is integral to deep contentment.

Dissatisfaction with life, the world, and existence also does not prevent contentment; instead reflects its absence – the trivial nature of our dissatisfaction underlies and confirms our discontentment. Finally the human propensity to see oneself, humanity, the world and even the universe as ultimately absurd obstructs individual contentment, but this can be transcended by re-evaluation of its truth value and recognition of a fundamental contradiction, contentment itself disproves any notion that life is completely absurd.

In short, contentment is about freedom from these antagonistic experiences of ourselves and reality. It turns out that freedom in this sense is another descriptive characteristic of contentment. We conclude – contentment occurs when we customize a life of our choosing, create peace of mind through virtuous and purposeful conduct, and free ourselves of the common psychological and mental barriers to tranquility.

Next time I will explore variations on the structure of contentment. Join me then.