Last time we saw how the pragmatism of William James incorporates subjectivity within truth, and how empiricism’s reliance on perception imposes a quality of the subjective on much knowledge. Today we investigate two additional subjective features of truth. 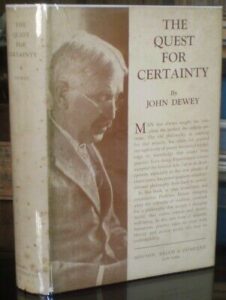 We start with John Dewey, a pragmatist and follower of James, who attributes a vital role of the knower in knowledge. Dewey argues that knowledge is ‘eventual,’ that is the outcome of directed experimental operations rather than something existing before the act of knowing. He is particularly struck by the significance of the observer with respect to Heisenberg’s principle of indeterminacy. “Knowing is seen to be a participant in what is finally known. Moreover, the metaphysics of existence as something fixed and therefore capable of literally exact mathematical description and prediction is undermined.”5

Our fourth subjective feature of certainty and truth concerns the first of the five tiers of reality identified in an earlier blog, internal reality or that of the individual’s mind.6 Here I must challenge Professor Adler on his thesis that all knowledge must be public, never private, and that nothing knowable by only one person can have the status of knowledge.7 Perhaps this is fair with respect to evidence in science, where accessibility to others is integral to the scientific method. But with respect to our personal knowledge, it seems arbitrary to assume inner truth is logically impossible simply because it cannot be directly observed by others. The individual alone can identify his innermost primal self, existential truths such as his continuity with his past self that instantiates his identity, and transcendental truth such as the unity of self and cosmos. Rene Descartes argues rather convincingly that our own consciousness is the most certain thing of which we are aware while Martin Heidegger finds the direct knowledge of our own being is the platform for understanding all being.

In conclusion we see that much of what we consider truth and reality is not purely objective, but at least partially subjective, but we are not through. Next time we will look at the most passionate arguments ever given for truth as subjectivity in the writing of Soren Kierkegaard.