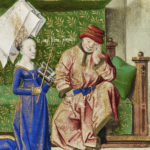 “Then she said … I assert that there is no such thing as chance, and I declare that chance is just an empty word [inanem vocem] with no real meaning.”  – Boethius, The Consolation of Philosophy.

While questions of teleology can be applied to everything, our interest is in its application to five specific areas:

1.   The origin and development of the universe

2.  The appearance of life

3.  The evolution of humans

4.  The existence of individual men and women

5.  The course of human history

An explanation of how these arose is fundamental to human meaning. This post and the two that follow attempt to answer the question: Do they result from chance alone or is there an element of design? 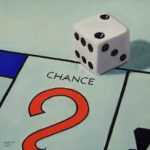 In the field of teleology, chance and design are effectively opposites. As we discussed last time, chance refers to the absence of any cause of events that can be predicted, understood, or controlled, and thus is a potential explanation of things and events. But unlike design which may or may not justify why things and events are as they are; when chance is deployed as an explanation of how things occur, there is an implicit corollary that there is no why at all.

However by this definition, chance does not appear to be the explanation of much in the universe, at least from the perspective of science. We know this based on two fundamental inconsistencies which result if chance is hypothesized. First science is based on the premise that events in the universe are determined by preceding conditions and events; that is, under given conditions, subsequent events are both predictable and necessary. Second, science aims to understand all facets of the universe, indeed often with the goal of prediction and at times control through technology. Conversely science is undermined if chance alone is the cause of natural events and entities.

Therefore scientists tacitly deny the Big Bang occurred by chance once they attempt to find an explanation such as an unobserved multiverse or a quantum flux. Similarly science rejects chance as a cause of any specific event or entity which it attempts to understand, which is – everything !- including the appearance of life, the evolution of man, even the birth of any individual person. In the case of human history, most events occur through the actions of individuals, and historians go to great length to discover the causes of events making chance a limited factor in human history.

If chance and design are the two main explanations of the universe and other key matters, and if chance is eliminated on the grounds of scientific and historical investigation, then design becomes the default explanation. Or is there an intermediate explanation for these things? Next we will investigate complexity and chaos theory as chance-like explanations of reality.