“I cannot think of the present state of humanity as that in which is it destined to remain…Only in so far as I can regard this state as the mean towards a better, as the transition-point into a higher and more perfect state, has it any value in my eyes.” – Johann Gottlieb Fichte. 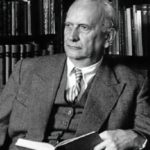 Last time we looked at Kant’s theory of perpetual peace as the hope of human destiny. Now I would like to explore Karl Jaspers’ thoughts on human destiny. He starts his chapter The History of Man1 by noting the philosopher sees history differently than the historian; probing history for meaning, unity, and structure. Jaspers divides human history into four phases: (1)  Promethean – the long prehistoric period when language, tools, and the use of fire developed; (2) Ancient high civilizations – Egypt, Mesopotamia, Indus valley, and China; (3) Axial period (800 – 200 BCE) when spiritual foundations of humanity were laid by Confucius, Lao Tse, Buddha, the biblical prophets, Christ, the Greeks, and others; and (4) Age of Science and Technology. Jaspers thinks the third of these is key because it is when man became aware of being as a whole, recognized his limitations and helplessness, began to deal with the big questions, and discovered the depth of selfhood – in short, it was the beginning of philosophy.

History now in his view is world-wide in scope, and prior history is “a mere aggregate of local histories.”2 However despite the terrible catastrophes of our era, by seeing the horizons of man’s past we are led to justifiable belief in the future potentialities of humanity. The chaotic course of history tells us the meaning of history cannot be formulated in terms of an aim. He writes, “What does God want of men? Perhaps a general answer may be ventured: history is the stage upon which man can reveal what he is, what he can be, and what he can become, of what he is capable…But history means far more: it is the stage on which the being of the godhead is revealed.”3

Jaspers thinks we cannot identify an ultimate aim of history, but suggests we can posit an aim premised on the realization of the highest human potential – the ‘unity of mankind.’ 4 He does not think we can produce this unity through a rational, scientific universal or a universal religion. Instead it is found in the depth of historicity, a boundless communication, and a never-ending dialogue in an arena free of violence – a condition which will require a “stubborn political struggle against the powers that be.” 5 He sees that potential in the constitutional state built on elections, laws, education, and freedom of the press. But he warns us this will not come about by enthusiastic optimism, but rather from stark realism and hard work including deep self-assessment.

This path proceeds from recognition of the Comprehensive (being as a whole) and transcendence. In the end we must raise ourselves above history while also accepting our historicity. We must not deify history; it is not the last judgement. Failure is no argument against truth. “By making history our own, we cast an anchor through history into eternity.” 6