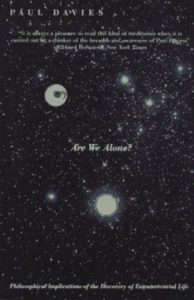 Davies talks through the philosophical issues starting with the traditional concern of societal disintegration after publicity of extraterrestrial life or intelligence, which seems unlikely. He postulates that statistically an alien civilization would be more advanced than ours given our reaching out beyond the solar system is only a recent capability. Conventional religious beliefs may be undermined or otherwise affected or humans might embrace the higher religion of a more advanced civilization or even see them as God-like. Some additional philosophical issues he raises include:

Until the search for extraterrestrial life, especially intelligent life is successful, we are left with the lingering question first posed by Enrico Fermi – “Where is everybody?” If there are a multitude of advanced alien life forms, it seems reasonable to expect they would already have contacted or visited us, or even have preceded the arrival of humanity on Earth. Disallowing the dubious assertions of UFO theorists, the corollary is that supra-human intelligence does not fall within our current space-time corridor, or perhaps has chosen to remain hidden. 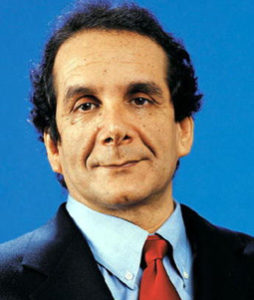 The late Charles Krauthammer wrote a poignant article, Let’s Put a Hopeful Face on the Cosmic Silence3, in December 2011. He saw our drive “to find our living, thinking counterpart in the universe …betrays a profound melancholy – a lonely species in a merciless universe anxiously awaits an answering voice amid utter silence. That silence is maddening. Not just because it compounds our feelings of cosmic isolation. But because it makes no sense.”

This existential observation is followed by his recalling Carl Sagan’s concern that the explanation of the silence may be that advanced civilizations destroy themselves just when they develop the technology to reach out beyond their own stellar system; the silence then is “not a flattering lesson about our uniqueness, but a tragic story about our destiny.”

He then considers whether intelligence is fatal not only ultimately, but nearly instantly on a cosmic time scale. His solution is discipline which is the work of politics, the ordering of society to permit human flourishing while restraining Hobbesian instincts. He concludes, “The debased and mundane practice of politics… will determine whether we will live long enough to be heard one day. Out there. By them, the few – the only- who got it right.”

If Davies and Krauthammer are correct, then we anxiously await conclusive evidence of extraterrestrial life and intelligence. Such evidence will suggest answers to questions about the origin of life, the regularity of intelligent life forms, theories of emergence and self-organization, and possibly the workings of the divine. But perhaps most importantly it will serve as a precedent – confirming that intelligent beings can overcome the propensity to destroy themselves, and so offer space for optimism on the future of mankind.