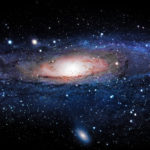 Philosophy is to be studied , not for the sake of any definite answers to its questions, since no definite answers can, as a rule, be known to be true, but rather for the sake of the questions themselves; because these questions enlarge our conception of what is possible, enrich our intellectual imagination and diminish the dogmatic assurance which closes the mind against speculation; but above all because, through the greatness of the universe which philosophy contemplates, the mind is also rendered great, and becomes capable of that union with the universe which constitutes its highest good.”  – Bertrand Russell

The fourth level of Ethics goes beyond human relations to how one should behave with respect to ultimate reality. If your ultimate reality is humanity, there is in theory no further moral burden, but while humanism may be the dominant belief system of contemporary society, I suspect no reader will on deep consideration stop there. At a minimum, cosmic reality as defined by science obliges humans to develop a mode of conduct consistent with science outside of immediate human interests. We inhabit the Earth and our treatment of our home planet and its other inhabitants is an issue of ethics. We have to come to terms with the consequences of human actions on other species, natural beauty, and the environment. I believe most thoughtful people feel that we have an ethical duty to protect for the future these nonhuman assets from common stupidity, individual avarice, and our immaturity as a species. We should carefully consider the advice of reputable scientists when it is based on consensus. The greatest vice of our lifetimes by our species may be irreparable harm to the only planet known by us to have life, and especially advanced forms of life.

Relationship to the cosmos can be more however. It can take the form of direct observation and appreciation of nature, the practice of astronomy, scientific research and experiment, or even the commitment to learning in the many branches of science and mathematics. For those not disposed to believe in God, this is their religion. It is not a worship of the universe per se, rather an awe of its magnificence and a deep desire to understand it to the extent possible. Whatever one’s personal beliefs, an ethically driven interest in nature and the cosmos is a value not to be overlooked.