“Science cannot solve the ultimate mystery of Nature. And it is because in the last analysis we ourselves are part of the mystery we are trying to solve.” – Max Planck.

After twenty-six blogs we are now ready to summarize the scientific perspective on ultimate reality. It seems to me this comes down to the intersection of the very small – that is what makes up the substances of the universe – and the incomprehensibly large – that is the entirety of its substances. 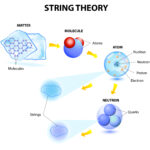 At the composition end we find two modes: (1) structural – including the theoretical strings of energy in multiple dimensions, elementary particles, atoms, and the elements of the periodic table plus more obscure components such as dark energy and dark matter, and (2) dynamic – including fields, quantum uncertainty, observer effects and decoherence, the four forces, the interchangeablity of matter and energy, wave/particle duality, and the dubious prospect of panpsychism. At the other pole we likewise have two modes: (1) structural – the universe or the multiverse, its instantiation in all light, matter, and events, and space-time itself, and (2) the transcendental –  unity, uniqueness, order, subtotal accessibility, infiniteness, cosmic evolution, and perhaps macroscopic consciousness.

But many scientists extend the transcendental further. There is the issue of dimensions beyond the four known to us. There is Neil Bohr’s complementarity of the subjective and the objective. We have Carl Sagan’s formula of three proper nouns: Universe = Nature = Reason (is anyone else reminded of the Christian Trinity?). There is Neil deGrasse Tyson’s “great chain of being,” reflexivity of in-ness of the universe and of ourselves, and the stimulation of spirituality. And of course there is Einstein’s unexpected ‘comprehensibility of reality’ where through a leap (of faith or of intuition?), the “rationality manifest in existence” brings one to an intangible, impersonal deity.

If we assemble all of the pieces into a single understanding of ultimate reality we are left with not only awe of the physical, but a near mystical understanding of existence that has been “sensed” by the great thinkers and the great spiritualists in human history. Perhaps they were never far off the mark, only limited by vocabulary and knowledge needed to fully express it. We will come back to this intriguing possibility in our synthesis of this section after we examine descriptions of ultimate reality by philosophers and theologians that follow. Stay tuned.