So how does the astrophysicist think about consciousness and its implications at the cosmic level. We begin with Michio Kaku who proposes a theory he calls ‘the space-time theory of consciousness’ and which he asserts is “testable, reproducible, falsifiable, and quantifiable.”5 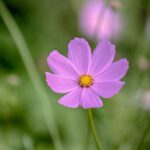 Kaku claims that consciousness is “the process of creating a model of yourself using multiple feedback loops – for example in space, in society, or in time – in order to carry out a goal.”6 In that case animals, plants, and machines can be conscious; starting say with a photocell (measuring temperature or light) with a single feedback loop, followed by for instance a flower with perhaps ten such loops (measuring temperature, moisture, direction of sunlight, gravity, etc.).

In his theory, Level 1 consciousness entails models of oneself in space (e.g. reptiles or insects) and Level 2 consciousness entails social place within a group. Humans have a still higher consciousness in that we understand time and our position within it which permits planning into the future and imagination of an indefinite future. This future-directed function is in Kaku’s opinion the origin of the large human memory which it projects into the future. Self-awareness in his model is “the ability to put ourselves inside a simulation of the future, consistent with a goal.”7 Of course Kaku’s point in this description is to understand how machines such as computers or robots might achieve higher levels of consciousness, but it seems consciousness might be attributed to the cosmos itself if such conditions apply, to wit creation of a model of itself through feedback loops in space and/or time.

From there we turn to John Barrow and Frank Tipler who analyze the similar question of how the universe came to be the way it is when quantum mechanics requires an observer for events to take place as indicated by the collapse of Schrodinger’s wave function.8 In their words, “…physical reality does not exist independently of the observer and his experimental apparatus.”9 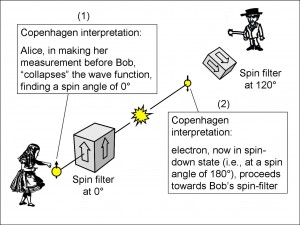 By interposing a second observer who collapses the original observer’s observations and the observed event, Eugene Wigner showed that “the wave function does collapse during a measurement, and that it is the interaction of human consciousness with the physical system that is responsible for the collapse.”10 But Hugh Everett III points out that one can extend this paradox to an infinite series of observers leading to an unwieldy view of reality.

8Very briefly, the wave function which describes for example a beam of electrons hitting a photographic place is large, but each electron actually hits that plate at a localized point. In the Schrodinger interpretation this is seen as a sudden instantaneous ‘collapse’ of the wave function into a single point on the plate during measurement. This ‘collapse’ according to Max Born is the consequence of a human observer, but the ultimate implication is the strange but now generally accepted fact that no event can occur in space-time without an observer to instantiate it.