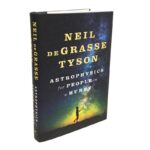 Strongly influenced by Carl Sagan, Neil deGrasse Tyson grew up to become perhaps the most well-known living astronomer. In his book Astrophysics for People in a Hurry, he presents this challenging subject in a highly comprehensible way to nonscientists. Here are some of his indications of the universe as ultimate reality.

We start with the following: “…however big the world is – in our hearts, our minds, and outsized digital maps – the universe is even bigger. A depressing though to some, but a liberating thought to me.”2 It appears the sheer size of the universe, for Tyson, is one feature of its ultimacy. There is a corollary to this: the fact that the universe does not center on or revolve around us, ultimate reality transcends any single center, even us clever humans.

Another feature of its ultimacy is the immense numbers of the constituents of the universe. He offers some examples: But we are not insignificant by virtue of these facts; another component of the ultimate nature of the universe is that while we and no other creature is master of space and time, we all participate in “a great chain of being.”6 And he tells us that this ultimacy is reflexive, “We do not simply live in this universe. The universe lives within us.”7 From all of this (and more – dark energy, dark matter, the universality of physical laws, etc.) comes Tyson’s ‘cosmic perspective’ where he truly shows how ultimate is the reality of Sagan’s Universe: “The cosmic perspective is spiritual – even redemptive – but not religious. The cosmic perspective enables to grasp, in the same thought, the large and the small.”8

From these last two astronomers I think we get a final formulation of the universe as ultimate reality. The cosmos is rationale, comprehensive, large and single but numerous in parts, un-centered and autonomous, external and internal to us, and even spiritually simulating. Do we dare suggest that science is straying dangerously close to the boundary line of religion?