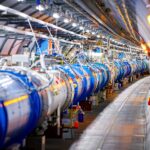 Last time we looked at the composition of solid bodies as one version of ultimate reality ending on the elementary particles that form the building blocks of matter. While they fit into two basic groups -quarks and leptons – there are a multitude of these elementary particles. Thankfully only a small number are constituents of the chemical elements that fashion most of our material world. These ‘particles of construction’ include electrons, photons, u quarks, d quarks, gluons, and gravitons. The electrons carry a negative charge, but little mass. The photons create the field that keeps the electrons attached to the nucleus. The u quarks and d quarks combine to create the protons and neutrons that make up the nucleus with the gluons as the ‘glue.’ Gravitons create the gravitational field through their great number and ‘spin.’3

Of course subatomic physics is much more complex with additional ‘particles of change’ such as W and Z bosons, Higgs bosons, and neutrinos; and ‘bonus particles’ such as c and t quarks, muons, and tauons. Dark matter is also likely some form of elementary particles. So far there are more than 300 known particles, some existing naturally, others found only with the help of atom smashers called particle accelerators. But one thing that unites them with all within the cosmos are the four fundamental forces: gravitation (the weakest of all, but responsible for the celestial mechanics), electromagnetism (which holds atoms together), 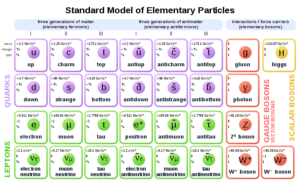 the weak force (which causes particles to decay into more stable pieces of matter), and the strong force (which binds the nucleus together). This picture of the elementary particles and the four fundamental forces is known as the Standard Model.4

Unfortunately I will have to stop there without exploring designer particles, holes, quasiparticles, the fractional quantum Hall effect, etc., all of which is way beyond my simple understanding. Instead I would like to move now to the philosophical implications of ultimate reality as the elementary particles and the four forces. It seems to me this is the most physicalist presentation of all and likewise the least satisfying. The number of particles is unaesthetically large; the means to identify most of them (particle colliders) is utterly unnatural; and the instability and ultrashort duration of most of them hints at a kind of artificiality. Certainly the theory of a material world constructed from a myriad of combinations of atoms of the 118 mostly stable elements listed on the periodic table is more palatable and more relatable as ultimate reality, even if less complete.

It is therefore not surprisingly that physicists have postulated a simpler and more unified theory of the material world which is the subject of our next meeting.