In the last two posts I described two pyramids of contentment: the first premised on engagement with the world and the second premised on limited involvement in society beyond a small circle of devotees of atarxia. Today we scale the final pyramid of contentment, one predicated on a complete or nearly complete withdrawal from the world and even from the society of others. This model will generally appeal to a small number of persons, particularly those seeking a purity of internal purpose – usually conceived either as enlightenment or as mystical union. Virtue is still foundational, but here internal virtue – self-mastery and self-transcendence – surpasses all other considerations. Single-minded internal virtue demands renunciation, not only of passions and desires, but even of many civilized necessities such as shelter, diverse diet, change of clothing, and of course technology. However the critical renunciation involves one’s long-cherished personal beliefs and one’s individual ego. This degree of withdrawal demands isolation from the world of humanity and non-intervention even in the proceedings of Nature.

The means to contentment, enlightenment, and the divine is disciplined and patient meditation (or contemplation) performed on a regular basis. Within that program one must confront death not as merely inevitable, but as integral to internal peace and the attainment of enlightenment and mystical union. The death of the ego or (its denial) is fundamental. Of course these foundational layers are enhanced by a supportive environment, either an uninhabited location (such as the desert Fathers preferred), a pastoral setting (such as Laozi and Buddha chose), or at least an insulated residence within a community. 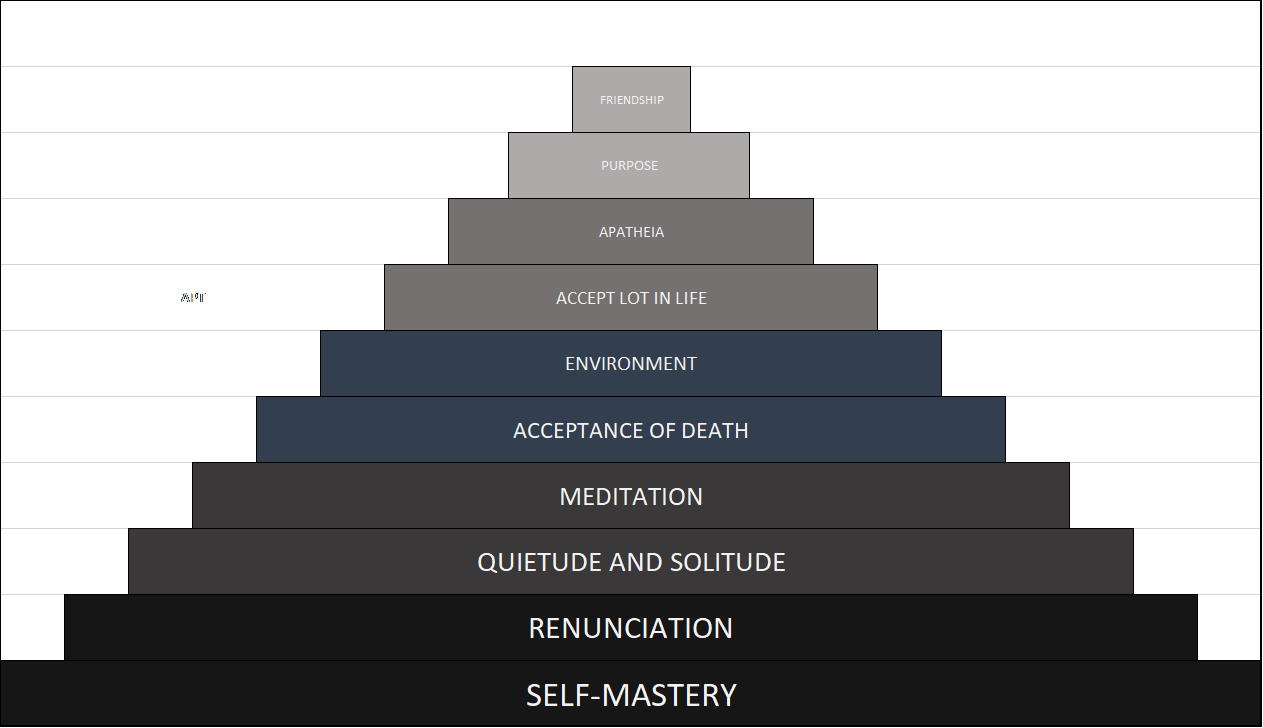 Along the way, the seeker of the contentment through worldly withdrawal must also come to terms with his or her chosen or imposed lot as we learn from imprisoned sages such as Boethius, Sir Thomas More, and St. John of the Cross. Each came to a kind of contentment in stark solitude and deprivation. Complete, voluntary self-denial may not be necessary as Buddha teaches with his “Middle Way,’ but neither can one achieve contentment while protesting one’s misfortunes.

Purpose in this model is generally singular – the achievement of enlightenment or union with ultimate reality – perhaps with the subordinate purpose of being an example for others (e.g. the Cynics). The drive to other goals must be overcome for the practitioner of withdrawal to be successful. In fact, an intense desire to achieve enlightenment or mystical union may undermine their actualization. Last, friends are of limited importance except to the extent one requires a guide or master who may also train others, some or all of whom may be seen as friends.

This completes our synthesis on contentment. The reader should exert significant effort to determine which model to utilize depending on logistics, personal beliefs, desired purpose, and stage in life. To me the most difficult model is that of engagement with the world while the most accessible is that of restraint. The Pyramid of Withdrawal is the one we must likely climb to reach the fourth component of the meaningful life, ultimate reality, which is the subject of the next section on this site.

2 Replies to “CONTENTMENT AND THE MEANINGFUL LIFE – SYNTHESIS (final continuation)”