“True contentment is a thing as active as agriculture. It is the power of getting out of any situation all that there is in it. It is arduous and it is rare.” – G.K. Chesterton. 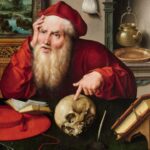 Still traveling, I return to A Loeb Classical Library Reader referenced in the last post where we find one other thinker who addresses contentment – Jerome (c342- 420 C.E.). His Latin name was Eusebius Sophronius Hieronymus but he is better known as Jerome of Stridon or Saint Jerome. His translation of the bible into Latin was the first and came to be known as the Vulgate. He was also a Christian philosopher known for his teachings on moral life mainly to city dwellers and especially to women.1 Today’s selection is from a letter to Marcella written in 385 C.E.

He starts by recounting how Origen2 and his followers spent their time either in prayer or in reading, while in contrast we are easily bored by these activities and soon return to worldly affairs. He has particular scorn for heavy meals, gossip, showy clothing, and the pursuit of wealth, all of which cause conflict in the mind. 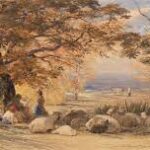 He explains, “…as today we have traversed a great part of life’s journey through rough seas, and as our barque has been now shaken by tempestuous wind, now holed upon ragged rocks, let us take this first chance and make for the haven of a rural retreat. Let us live there on coarse bread…and on milk, country delicacies, cheap and harmless.”3 Each of the seasons  offer in turn privacy, a place for rest, and escape from the cold unlike in the city where we find an unsettling bustle, fury, madness, and profligacy. Contentment comes from cleaving to God and hope in a future in heaven, not the “poor passing pleasures here on earth.”4

Though separated by 300 years and opposite views on the existence of God, Lucretius and Jerome seem to profess similar paths to contentment. Both urge us to abandon material goods and luxury. Both discount the benefit of society and encourage a return to nature or at least a more natural existence. Their main area of difference appears to be on ultimate reality where Lucretius believes we should contemplate the cosmos and Jerome asks us to seek for the divine. There is much to consider as we reconcile these two with each other and with our cavalcade of other great thinkers.

2Origen (c. 185–c. 253) was a Christian theologian who contributed to the foundations of church doctrine using classical philosophy to create an exegesis and harmonization of scripture (Stanford Encyclopedia of Philosophy, Origen [on-line]).