In the last two posts we have been looking at contentment as depicted by Seneca in On Tranquility of Mind. Continuing now, he encourages adaptability, since obstinacy leads to anxiety in the face of the unpredictability of Fortune.  Likewise he urges us not to be disturbed by the “failings of the crowd, rather see them as “not odious, but ridiculous.” 13 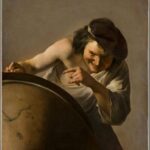 Democritus we are told laughed at the human race, and Seneca believes a sense of humor and of perspective is vital to personal equilibrium. We are also told to avoid the anxiety-causing trappings of a social persona, instead we should live virtuously, if simply, and enjoy leisure activities natural to oneself. Relaxation it turns out is essential to tranquility. His examples include walks in fresh air, a journey, good company, and even generous (but not excessive) amounts of wine. However the crux of contentment for Seneca I see in his most poignant line: “In any case, the mind must be recalled from externals and focus on itself. It must confide in itself, find pleasure in itself, respect its own interests, withdraw as far as may be from what is foreign to it and devote itself to itself; it must not feel losses and must not even construe adversity charitably.”14

In two other essays Seneca ties contentment and happiness to Nature and the cosmos. In the first, Consolation to Helvia, he announces: “Nature intended that no great equipment should be necessary for happiness; each of us is in a position to make himself happy.” 15 In the other, The Happy Life, we hear the reciprocal: “If the honorable alone does not satisfy you, then you must desiderate either the repose which the Greeks call aokhlesia (undisturbedness) or else pleasure. But the first can be had in any case; when the mind is at liberty to survey the universe and nothing distracts it from the contemplation of nature it is free of disturbance”16 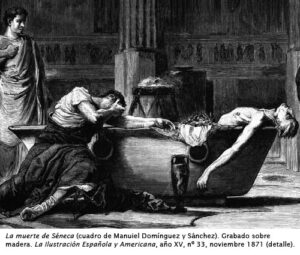 Perhaps it should come as no surprise that the erstwhile counselor and eventual victim of Nero should place such emphasis on tranquility and contentment. Seneca offers his prescription: we must participate in society, but limit marginal professional and social activities, overcome dissatisfaction with ourselves, abandon trivial desires and curtail property acquisition, learn to laugh at humanity and ourselves, accept Fortune, and most importantly retreat gradually into the self and the contemplation of Nature and the cosmos. His counsel is simple enough, but its execution is another story altogether.