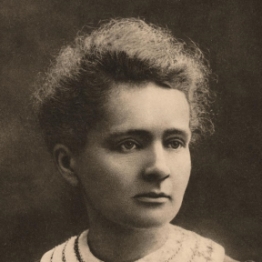 The fifth factor in successful cosmic purpose is realistic expectations. Here I cite the example of Marie Curie, double Nobel laureate and discoverer of radioactivity and the element radium. When she left the comfort of her parent’s home in Poland  for the Latin quarter of Paris in the 1890s, she sought purpose not in the social sphere, but in physics. Quoting from her biography (written by her daughter, Eve), “From childhood the Polish girl had carried the curiosity and daring of an explorer with her…In her walks in the woods she always chose the wild trail or the unfrequented road.”8 For her doctoral thesis Mdm. Curie decided to build on the work of Henri Becquerel who had found uranium emitted rays of an unknown nature that made an impression on a photographic plate.

Through meticulous investigation, she learned this radiation was an atomic property also found with thorium, and assigned the name radioactivity to the phenomenon. But her measurements of radioactivity from raw uranium and thorium ores were unexpectedly high leading her to discover two other previously unknown radioactive elements, polonium and radium. She later stated, “When radium was discovered, no one knew it would prove useful in hospitals. The work was one of pure science. And this is a proof that scientific work must not be considered from the point of view of the direct usefulness of it.” Curie understood the pursuit of pure science must include reasonable expectations, even though the utility of her work was an exception. A final concordant thought from from this remarkable woman, “Have no fear of perfection, you’ll never reach it.” 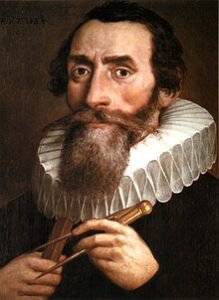 The last of our success factors is intention or deciding on a specific goal and formulating a plan for its accomplishment. Johann Kepler (1571-1630) was convinced at age 22 that Copernicus was correct that the sun was the center of the planetary system. Forsaking a career in divinity, he accepted a university post in mathematics and devoted his life to science. “What Kepler aimed at throughout his whole life was to find a law binding the members of the solar system together as regards the distribution of their orbits through space…”9  In his first great work Prodomus Dissertationum Cosmographicarum continens Mysterium Cosmographicum, he made convincing arguments against the Ptolemaic system in favor of the Copernican. When trigonometry failed to explain planetary motion, he chanced upon geometry as his platform, but saw that he required better data than that available to Copernicus. He next traveled to the observatory of Tycho Brahe with whom he collaborated until the latter’s death. With Tycho’s precise measurements and ten years of painstaking calculations, he learned that the planets including Earth follow an oval or elliptical path not a circular one as had been assumed by all prior astronomers and that the speed of movement varies by the distance from the sun. From this decade of pointed work he formulated the three laws that finally explained the nature of planetary orbits still accepted to this day.

In closing these six great historical persons exemplify the critical factors for a successful cosmic purpose: commitment, patience, flexibility, enjoyment, realistic expectations, and intentionality. Next we look at the benefits of cosmic purpose.