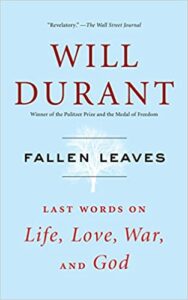 “I propose to tell, in a very informal way…how I feel, now that I have one foot in the grave, about those ultimate riddles…” – Will Durant.1

For Christmas, my daughter and son-in-law gave me this priceless book written by Will Durant (1885-1981) in the last years of his life. The first philosophy book I ever read was Durant’s The Pleasures of Philosophy (1952) which served as an introductory ‘text’ in my junior high school course on the humanities. Over the subsequent 47 years I have acquired nearly all of his books including Philosophy and the Social Problem, The Story of Philosophy, Transition, his 11 volume The Story of Civilization  (several co-authored with his wife, Ariel), The Lessons of History, Interpretations of Life, A Dual Autobiography (also written with Ariel), and The Greatest Minds and Ideas of All Time. I previously summarized and commented on his 1932 book, The Meaning of Life on this site.2 Much of Durant’s personal philosophy is suggested in these earlier works, but what makes Fallen Leaves (written 1968-1978) so special is that it clarifies his mature beliefs in the context of approaching death. As with Bryan Magee’s Ultimate Questions,3 this manuscript offers us the rare opportunity to hear the concluding thoughts of an acknowledged master of philosophy, and in Durant’s case, history as well.

The book consists of 22 chapters. The first five chapters offer the characteristically beautiful prose of Durant on birth, youth, middle age, old age, and death without taking on specific philosophical questions. However, the sixth chapter, On Souls, addresses some of the most troublesome questions in metaphysics. He tells us that despite ubiquitous houses of worship, we cannot know whether there is anything beyond death. He appears to doubt Kant’s assertion that we cannot know ‘the thing-in-itself’ and Schopenhauer’s belief that the world is “my idea.” In his view our perceptions of the world are instantiated in its reality.

Durant believes mind is not matter, as the pure materialist claims, since it does not occupy space. And, unlike Hume, he believes the self is real: “In addition to that succession of mental states there is, by the direct witness of introspection, a sense of continuity and personality constituting ‘the self’…”4 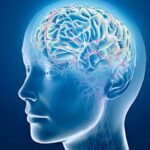 Durant is convinced the subconscious is in fact the  psychological ‘self.’ He continues: “…dormant recollections are part of the self and the soul; consciousness is not all of the soul, but only the soul’s supreme achievement.”5  Nonetheless the soul is distinct from the mind being “an inner directive and energizing force in every body…closely associated with breath.”6 For Durant the soul consists of “not merely sensations and ideas, but desire, will, ambition, and pride…” 7

However he does not expect the soul to survive death. In his words:

“Death is the breakup of the human soul – i.e. of the life-giving, form-molding force – of an organism into those partial souls that animate individual parts of the body; so these lesser souls can for a time continue the growth of hair and nails on a corpse. And when the corpse completely disintegrates there will be souls or inner energizing powers, even in the ‘inorganic’ fragments that remain. But my soul as me is bound up with my organized and centrally directed body, and with my individual memories, desires, and character; it must suffer disintegration as my body decays.”8