“Progress is the realization of utopia.” – Oscar Wilde 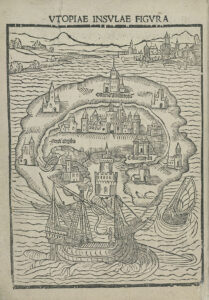 We have seen how some purposes of culture mimic individual human purposes, for example self-preservation and the making of a good life for oneself. Today we examine one last purpose we have as individuals that is mirrored in society – self-perfection. In the case of civilization, it can be argued that the highest purpose is striving for an ideal society. A perfect human world has come to be known as utopia after a book of that title (1516) by Thomas More. The word, utopia, is derived from the Greek words ou (not) and tópos (place), thus “no place” or “nowhere”; or perhaps eu (good) and tópos (place), hence “good place” (leading to an interesting paradox).1

Literary utopias are seen as better than reality by virtue of greater rationality, harmony, order, utility, morality, freedom, or human fulfillment; and preferably as a result of all these characteristics. The chronology of thinking about utopia falls into three rough phases: mythical, hypothetical, and dystopic. The earliest utopias are wistful reminiscences of a golden age such as the time of the Titans described by Hesiod (ca. 750 BCE), the  biblical Garden of Eden , and the Three Dynasties (tat’ ung) of Confucius.2 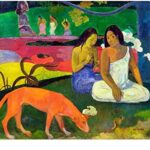 Somewhat more tangible are idealized notions of prehistoric or even existing primitive human communities such as the indigenous Americans or the Tahitians referenced by the romantic thinkers such as Jean-Jacques Rousseau or as painted by Paul Gauguin. While it certainly seems reasonable to seek out the best features of any human community including those purportedly ‘less advanced’, it is unlikely any cultured society will choose to return to an archaic world without modern comforts, electricity, technology, and diverse entertainments. Nonetheless, such reflection uncovers the value of simplicity, naturalism, innocence, cooperative spirit, and native ethics.

The second historical phase of utopia presents hypothetical societies with an ideal structure. The first of these appears to be by Plato in The Republic (360-370 BCE). Plato promotes a highly structured society with just three classes: guardians (rulers), auxiliaries (soldiers), and workers. Each class attends to its proper function without interfering with the others. The classes are carefully built by controlled breeding, education, and selection. The rulers are educated as philosophers and society is communized in order to eliminate frictions due to private property. Control is to be achieved by institution of a “noble lie” where citizens are told they were created by the gods to fit their roles. Wealth, population, and size are to be limited or optimized. The ideal state develops in three “waves,” (1) the choice of rulers among men and women of proper aptitude, (2) the sharing of communal life by all including the rulers, and (3) the process whereby “philosophers are made kings or kings, philosophers.”3