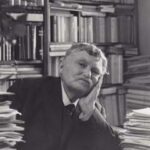 Gabriel Marcel, a Christian existentialist and contemporary of Sartre offers another perspective, speaking of the ‘presence’ of the other not as merely a thing before us, but as in relationship to us or even within us – an influx, an accretion, an intimacy, a spiritual availability, in other words – a ‘with me.’5 Unlike Sartre, Marcel sees the look of the other more optimistically: “Presence is something which reveals itself immediately and unmistakably in a look, a smile, an intonation, or a handshake.” 6 To him the subject/object enigma is resolvable, “…the person who is at my disposal is the one who is capable of being with me with the whole of himself when I am in need while the one who is not at my disposal seems merely to offer me a temporary loan raised on his resources. For the one I am a presence; for the other I am an object.”7 Marcel’s ‘presence’ is a reciprocity undiscoverable except through love which he believes trumps Sartre’s objectification struggle.

Karl Jaspers, a theistic Existentialist contemporary of Sartre and Marcel, appears to fall somewhere between them. The ‘other’ is not only undeniable but self-defining, “I am only in conjunction with the Other, alone I am nothing.”8 Nonetheless the self is completely subjective, “If we make ourselves into the object of our thinking, we become ourselves as it were the Other, yet at the same time we remain a thinking I, which thinks about itself but cannot aptly be thought of as an object because it determines the objectness of all objects.”9 Instead for Jaspers the crux of the ‘other’ involves the role of one’s fellow humans in judging one’s actions, a judgment less decisive than that of God, but at least accessible in this world.10  In the end, existential freedom does not mean absolute independence; but is dependent on enmeshment in the world of others.11

We could bring in other thinkers such as Martin Buber’s principle of ‘I and Thou’, where there is no independent ‘I’ at all, only an ‘It’ existing in relation to something other than itself, the ‘Thou.’12 Or we might interject Tillich’s ‘individualization and participation’ – the reality that self and world are correlated such that we share being triply with others – in space, through commonality of nature, and as parts of a whole.13 There is much to be said about the inescapable sense of oneself as individual and the rest of the world as both Other and Others. I suspect each of us experiences all the nuances of otherness, the familiar as other and the strange as other. Purpose in this setting is about breaking through the barrier separating oneself from the other to establish authentic