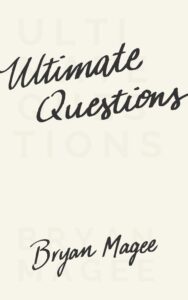 “WE HAD NO SAY IN EXISTING – WE WERE NOT GIVEN any choice. We just woke up into the world and found ourselves in it…most of us are in thrall to an instinct for survival that is programmed into us biologically. We are here now, and we want to go on living; so we try to make the best of it.” – Bryan Magee.2

On a recent trip to Boston, I found myself in the Harvard Book Store where I found this jewel of a book by Bryan Magee. I was familiar with Professor Magee (1930-2019) from YouTube searches I did on philosophy in the last four years. He hosted programs on the BBC in the 1970s and 1980s where he discussed and interviewed famous living philosophers on their philosophies or on their understanding of the thoughts of earlier philosophers.  His guests included W. V. Quine, Noam Chomsky,  A.J. Ayer, Hilary Putnam,  and many others and his subjects included Plato, Aristotle, Descartes, Marx,  Heidegger, Wittgenstein, Logical Positivism, and so forth. I found his clarifications of even complex philosophical subjects incredibly helpful. I strongly advise my readers to check out his programs – Men of Ideas, Thinking Aloud, and The Great Philosophers – on YouTube. 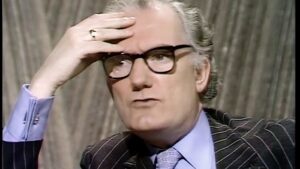 His obituary available at theguardian.com says he was a visiting professor at Harvard, Yale, Oxford, King’s College among others, published over 20 books, was an authority on Richard Wagner, an erstwhile television and media critic, and twice a member of the British Parliament in addition to his broadcast career. According to Wikipedia, Ultimate Questions was his last book (2016), but in the author’s opinion his only original contribution to philosophy. He was quoted in 2018, then living in a nursing home, that with this book he hoped to approach the originality of Karl Popper, Bertrand Russell, or Einstein “not because I want to be a clever chap but because I want to do things that are at a much better level than I have done them”3 – hard to believe!

The 127 pages that make up the text are divided into seven chapters of 10 to 26 pages each. The first chapter called Space and Time begins  with the simple observation that if we use 100 years as the extreme of age occurring in every era, human civilization is only 60 lives and Jesus is only 20 persons ago. Nonetheless, “each of us has no choice but to live the whole of his life in his own little bit of time.”4 Also “while we are enjoying our moment, our spatial movements are confined to a small space, so our limitations in that dimension too are draconian.”5  He then takes on reality in its totality reminding us that Einstein proved there is no objective now or flow of time, only time sequences, and that even at the speed of light, humans having short lifespans will always be limited to a small area of the cosmos. He reminds us that our apprehension of things is affected by relative sizes, that all beings are temporary rearrangements of subatomic matter that is continuously reshuffled, and that there is far too much in the universe for any of us to know or understand. He states his thesis succinctly: “it is surely clear that reality will never be intellectually mastered by humans.”6