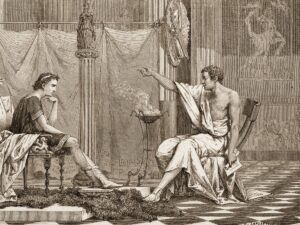 “Think long whether a man should be admitted to your friendship, and when you have decided he should be, admit him with all your heart, and speak with him as freely as with yourself.” – Seneca.

Our investigation of purpose has proceeded from internal and subjective formulations to more tangible externalization first as romantic love and second as family connections. This brings us now to arguably the highest form and meaningfulness possible in the sphere of human relationship, friendship. The corpus of philosophic literature, especially premodern philosophy, offers limited treatment on romantic love, and almost nothing (at least in the Western tradition) on family, but the subject of friendship has received considerable attention dating back to ancient times. The next few blogs unpack purpose in relation to friendship in the writings of classic philosophers such as Aristotle and Montaigne. Today we start with an overview.

Let’s begin with the dictionary definition of the word, friend – “a person attached to another by feelings of affection or personal regard.”1 This is in contradistinction to an acquaintance defined as “a person known to one, but usually not a close friend.” 2 The interest of the philosopher centers on this fundamental difference of degree; a friend being close or trusted as opposed to an acquaintance whose relationship is casual, lacks affection, or is merely that of an associate, particularly a business associate. We will take up acquaintance in the next section. 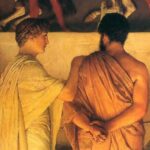 Chronologically, I suspect the first kind of purposeful relationship we seek in youth after locating our place within the family originates in a yearning for friendship. The greatest strength of the family – automatic belonging – paradoxically undercuts its supremacy since we eventually value more the voluntary acceptance of ourselves by others and freely chosen intimacy. In maturity this becomes problematic; friendship feels artificial if pursued to fill a declared purpose, and yet the highest level of friendship requires some measure of acknowledgement that includes a clear sense of its purpose.4 So while friendship must occur through accident or fortune not planning, it is sustained by intentional effort.

In short philosophical friendship is a form of voluntary, unconditional love lacking passion, physical desire, and selfishness and based on a deep altruistic connection with another person. Next time we will examine friendship as related in the ancient story, The Epic of Gilgamesh.