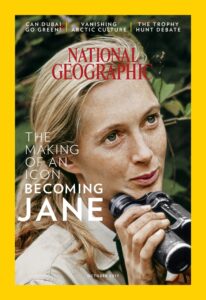 “I feel it is important to draw attention to the fact that the work which Jane Goodall has done…has been so important as to necessitate a complete review of scientific thought about how to define man himself.” – L.S.B. Leakey1.

In our exploration of the dimensions of cosmic virtue we next happen upon one of the greatest and most inspirational stories of modern science, the life and work of Jane Goodall. This remarkable woman developed a deep love for animals in her childhood, but due to financial and perhaps gender restraints in the middle part of the 20th century went to secretarial school rather than college. She worked first for Oxford University and then a documentary company before waiting tables one summer to save money for a trip to Kenya. There she boldly contacted the famous paleoanthropologist, Louis Leakey, who saw the potential in this novice scientist, offered her temporary employment, and assisted her in raising funds to study living primates first hand, a most unusual course for a woman of the 1960s. 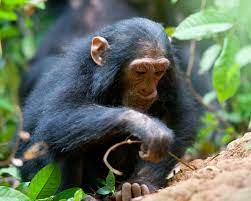 Her signature work on chimpanzees done at the Gombe Stream Game Reserve in modern Tanzania was unprecedented. Living in the wild at incredible personal sacrifice and with painstaking patience, she was eventually accepted by a troop of chimpanzees where she learned previously unknown secrets about their behavior, especially their making of tools, a characteristic previously thought to define the human species. Over the next decade she wrote over a dozen books on chimps and other wild species while earning a PhD in Ethology at Cambridge University. Her funder, National Geographic, sought to focus on a somewhat different narrative – Jane herself – in their words: “a modern scientific zoologist” and “a charming young Englishwoman.”2 p 47

She found the focus on herself as the main story distasteful but accepted it as the necessary price to save the chimpanzees. In her words, “Surely it is up to us to do something to ensure that least some of these fantastic, almost human creatures continue to live undisturbed in their natural habitat.”3 51 We hear her transformation; simple scientific curiosity and love of animals becomes personal mission. For the rest of her long career, Jane used her fame and accomplishments to mentor the next generation of scientists and to promote conservation in the developing world especially in regard to chimps. In her, cosmic virtue and individual purpose merge into a meaningful life.

Next time we will review the last 39 blogs comprising the subject of cosmic virtue and its place in the meaningful life for all of us.