“I did not become a vegetarian for my health, I did it for the health of the chickens.” – Isaac Beshevis Singer, Nobel Laureate in Literature, 1978.

I previously noted that the domain of Nature includes two facets – nonhuman living things and the physical environment. Last time I suggested the correct attitude to Nature is respect for all life and reverence for the Earth. First we will expand our view of virtue towards nonhuman life and later we will treat with the environment. 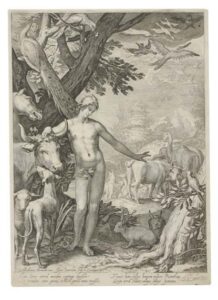 In the Bible, God is said to have allowed the first man, Adam, to name the animals,1 and to have placed the Garden of Eden at his disposal2 (other than the fruit of the tree of knowledge of course). The metaphorical meaning is clear; only an organism as intelligent as Homo sapiens can develop nomenclature and classifications for all living species and subdue its surroundings. Anthropology tells a similar story – early hominids likely went from near total herbivores to scavengers to hunters, manufactured increasingly sophisticated tools, learned to control fire, tamed animals, and developed progressive control over the environment.

Nature left modern humans with an ethical dilemma; most natural predators will struggle to survive without meat and follow instinct rather than deliberation in the choice of sustenance, but humans can survive as herbivores and can choose what to eat. Therefore the choice to eat meat in general is one to kill animals for preference alone. The conscious decision not to eat meat seems to have developed in ancient India with the Hindus, partly due to their consideration of cows as sacred and partly because of the belief in reincarnation. One will only reluctantly eat an animal whose soul  may have been a human being, perhaps even a family member of friend in a former life. 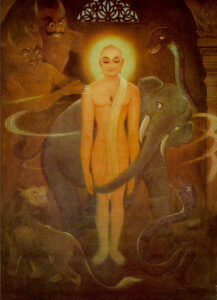 In sixth century B.C.E. India, a wandering ascetic son of a nobleman achieved the title of Jina (‘conquerer’), assumed the name Mahavira (‘Great Hero’), and founded a philosophy called Jainism. Among the doctrines of this skeptic creed is the belief that the means to release from the cycle of rebirth is complete ahsima – abstinence from injury to any living thing. Here we find radical protection of all life forms: water is strained and air filtered to avoid ingesting living things, agriculture is forbidden as tilling the soil kills insects and worms, and one sweeps the ground in front of one’s steps to avoid trampling on tiny animals.3 This may seem excessive, irrational, or impossible, but it offers us an example of the extreme respect of life some people have considered and embraced.