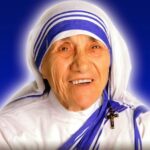 The consummate example of a saint in modern times seems to be Mother Theresa, winner of the Nobel Peace Prize plus over a dozen other humanitarian awards for her missionary work for the destitute and the dying in the slums of Calcutta and more than 25 countries worldwide. She was canonized in 2015 by Pope Francis and so meets the formal definition as well as the general designation of saint.

In her 1982 book, The Love of Christ, she gives us clues to the inner thinking of the saintly mind. “The work is our only way of expressing our love for God, our love must pour on someone.”3  “We can work, but we cannot do it without God’s help.”4 “One cannot expect to become a saint without paying the price, and the price is much renunciation, much persecution, and all sorts of sacrifices.” 5 “At death we will not be judged by the amount of work we did, but by the love we put into it. And this love must come from self-sacrifice and be felt until it hurts.” 6 She also she tells us of the spiritual side of sainthood: silence is the means to God. “Remain as ‘empty’ as possible so that God can fill you. Even God cannot put anything into what already is full.”7

“I slept and I dreamed

that life is all joy.

I woke and I saw

that life is all service.

I served and I saw

that service is joy!”8

The second form of the saint is more secular, emerging in a world of diminished belief in God and formal religions. The absence of divine inspiration and presumed assistance places the secular saint between the traditional saint and hero. Its backdrop is humanism and its force is existential. Absolute freedom entails responsibility which thus underpins the human search for meaning. 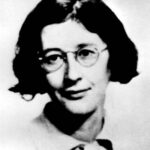 Francis Ambrosio offers the example of Simone Weil, an early twentieth century French philosopher and antifascist who defined justice as seeing no avoidable harm is done by any persons. Absolute freedom imposes on us a strict responsibility to do all in our power to meet the needs of body (food, shelter, clothing, physical security) and soul (meaning and value) of every other person. Late in life she admitted to belief in a personal God, but declined to join any religion.9

Ambrosio also considers Martin Luther King a secular saint. While Christian, King draws on Greek philosophy, extracting from Plato’s body-soul distinction the concept of a poverty of spirit characteristic of modernity and the cause of its violence and oppression. His righteous solution, founded on self-mastery and self-respect, is the path of non-violence.10

Ambrosio closes: “the secular saint does not live human questions in terms of their truth of falsehood, but rather in terms of the way his or her participation in the dialogue shapes that one human identity for which he or she alone is responsible, and for the meaning the one life and death that is given to them within the condition of human existence.”11