Last time we looked at the earliest forms of Christian asceticism as demonstrated by the life and crucifixion of Jesus, the martyrs of pagan Rome, the desert Fathers of Christian Rome, and the early development of Catholic doctrine that included the sacrament of penance.

After the fall of the Roman Empire, strict asceticism in isolation was restructured as monasticism, most notably by Benedict of Nursia who founded a monastery and imposed the Benedict Rule in the 6th century. He thought following the individual Eastern way failed due to relapses, and thus he urged communal living, without rivalry between monks, under a leader or abbot, with self-denial that stopped short of harm to health or mind. His maxim was “Give up your pride and freedom, and find here security and peace.”7 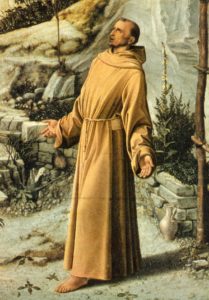 But this early austerity and poverty eased over time as monasteries grew rich, and new movements appeared, for example that of St. Francis (13th century) with nomadic, penurious monks called mendicant Friars. Their goal was not salvation per se, but to be the instruments of God’s will. Still later, Christian mystics such as St. John of the Cross (16th century) resumed a solitary, rigorous self-denial as prefatory to spiritual union with God.

Eventually, Protestantism appeared in the 16th century as a revolt against the apparent corruption of the Roman Church and increasing indulgences. 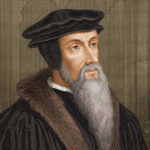 Protestants rejected saints, monasticism, salvation through individual effort, and especially severe self-denial – the last on the basis that all of God’s creation including human physical needs should not be interpreted as evil nor rejected. Instead leaders such as John Calvin urged an inner-worldly asceticism meaning sobriety, chastity, temperance, and profit through work. Paul Tillich distinguishes Catholic ontological asceticism, the devaluation of finite being; from Protestant moral asceticism, discipline for creative work and the unity of the human and the spiritual. “The [Protestant] saint … knows where to go and where not to go. He knows the way between impoverishing asceticism and disrupting libertinism.”8

In conclusion, asceticism in its many forms has been integral to Christian thought either as (1) utter self-denial for personal salvation, as example for others, in service to God, or for mystical union, or (2) in moderation for divine forgiveness or ethical creativity. Monasticism, sacramental penance, and inner-worldly asceticism persist to this day. For Christians then, as with the Hindus and the Cynics, the choice of some level of self-imposed suffering is instrumental for self-purification, ethics towards others, individual purpose, personal apotheosis, and union with the ultimate.