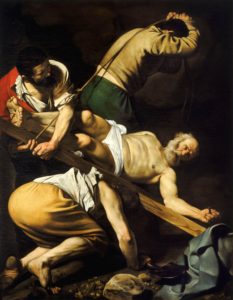 The voluntary acceptance of suffering has permeated Christianity from the beginning and took eight major forms: (1) the asceticism of Jesus and the disciples, (2) Jesus’s assent to crucifixion, (3) martyrdom in pagan Rome, (4) the asceticism of the desert fathers in Christian Rome, (5) the doctrine of the sacrament of conversion (penance), (6) medieval monasticism, (7) mystical self-denial, and (8) Protestant internal asceticism. Let’s look at each of these briefly.

Some historians see Jesus as a virtual ‘Jewish Cynic’, living a nomadic lifestyle, without possessions, and depending on the charity of others. It is thought that Hellenism and Judaism converged in Galilee, as Gadara, a center of Cynic activity, was a mere day’s walk from Nazareth. In the Sermon on the Mount, Jesus advocates poverty and at other times in the New Testament he assures his disciples that God (nature) will provide for them.1 Jesus’s acquiescence to torture and crucifixion can be seen as the ultimate ascetic act – personal suffering and the surrender of life as atonement for the sins of humanity. It is no accident that the tool of that suffering became the very symbol of the divine.2 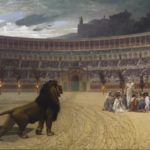 Jesus’s ascetic example endured among the early Christians who at least initially committed to communal living and rejection of personal property. However the more notable form of Christian asceticism for the next 300 years was in the choice of the martyrs to relinquish their lives rather than deny their beliefs. Salvation was found in gruesome deaths in the arena sometimes at the jaws of wild animals or by other forms of painful execution. Historians assure us persecution of Christians was fairly uncommon in the pagan Roman Empire, but we can should not underestimate the powerful impression even a few martyrs made on others. This supreme ascetic practice thus served the philanthropic goal of inspiring others to Christian beliefs. 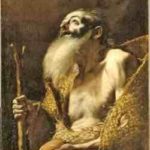 After Christianity became the official religion of the Empire under Constantine in the 4th century, martyrdom was no longer viable and the Church became wealthy and indulgent. A new group of ascetic hermits, called the desert fathers, appeared in protest of Christian materialism. They followed the custom of the Cynics by renouncing all possessions, donning the ragged robe of the philosopher, and subsisting on alms.3 Their escapist asceticism enforced a resistance to temptation in the quest for salvation.4

Meanwhile Church doctrine developed with seven sacraments; one called conversion is the means for the sinful to reconcile with the divine (the other sacraments are baptism, communion or Eucharist, confirmation, marriage, holy orders, and anointing of the sick). Conversion begins with confession, followed by penance, and finally forgiveness. Internal conversion is associated with “salutary pain and sadness which the Fathers called animi cruciatus (affliction of spirit).”5 Penance takes the form of fasting, prayer, and almsgiving, all of which are emphasized on special days of penitential practice such as Fridays and Lent.6