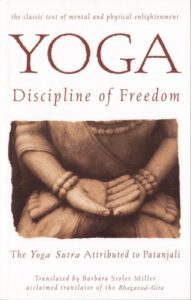 “Perfection of the body and senses comes from ascetic practice, which destroys impurities.” – Patanjali, the Yoga Sutra.1

Last time we looked at the place of asceticism in the Hindu tradition. In that context there appeared early in ancient India a system of self-discipline known as yoga, loosely meaning the ‘yoking’ of one’s consciousness to spiritual liberation. The finest account of this practice is attributed to one of the great thinkers of the East, Patanjali (c. 150 b.c.e.), in his text the Yoga Sutra – 195 aphorisms that represent one of the most lucid expositions ever on the human condition of cognitive ignorance and suffering, and the means to tranquility.

Most Westerners think of the practice of postures, hatha-yoga, as “yoga” but historically that form has been given less weight, while the ascetic component has been emphasized. It turns out yoga rests on a paradox: human suffering and anguish are overcome by ascetic self-denial. However the freedom offered by Patanjali’s text “is not realized through mystical experience but through a logical series of meditative practices and hyperconscious thought experiments.”2

Patanjali tells us the world can serve the goals of either sensual experience or spiritual liberation. The former leads to suffering because of attachment to the material and ignorance of its distinction from spirit. In contrast, yoga allows the cessation of the turnings of thought through practice and dispassion. The highest level of dispassion comes from a total absence of craving for anything material, a circumstance that leads to the accurate discrimination between material (prakriti) and spirit (purusha).3 The rewards of the austerities of yoga are tranquility and moral rectitude.

It seems to me that this remarkably short text is one every person in search of the best possible life should study. It offers the non-Hindu a surprisingly fresh, well thought-out perspective on metaphysical dualism and a nearly existential understanding of the human condition plus a technique to overcome bodily discomfort and mental angst. It is not dependent on the embrace of the hatha form of yoga or the Hindu religion. I see it as a practice which can be tailored to one’s needs and deserving of a place in the philosopher’s toolbox.

Next we will look at Western philosophy’s version of asceticism developed by the ancient Greeks and known as cynicism.