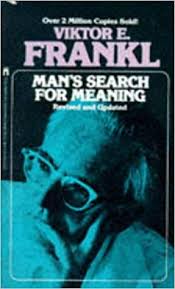 “There is only one thing I dread, not to be worthy of my suffering.” – Fyodor Dostoevsky

Last time I introduced Viktor Frankl, a psychiatrist, holocaust survivor, and author of Man’s Search for Meaning. Frankl discovered that even extreme suffering does not make life meaningless, and can prompt personal meaning. However, as a physician and healer, his first caveat: if suffering is avoidable its cause should be removed. Anything else is masochism, not heroism. He does not advocate asceticism; on the contrary he writes: “in no way is suffering necessary to find meaning.”1 Rather his point is that “meaning is possible even in spite of suffering.”2  This is the comfort he  offers to those facing unavoidable suffering

His philosophy is based on three fundamental premises:3

(2) Humans have a will to meaning.

The first of these, freedom of the will, he considers the immediate data of experience, although of course freedom is limited by the human condition and by one’s circumstances. His life experiences have led him to believe that human will is directed – not to pleasure as asserted by Freud, nor to power as maintained by Nietzsche and Adler – but to meaning which subsumes the others. He adds that the meaning the will seeks requires a commitment to something beyond oneself or super meaning, and freedom makes one responsible for fulfilling it.

Frankl thinks there are three ways a human life can be meaningful: (1) what we give, i.e. creation, (2) what we take, for instance peak experiences or love of another, and (3) the stand we take to a fate we cannot avoid or change, such as an incurable disease.4 It is this latter point which he extracted from his experience in a concentration camp. But like Buddha, Frankl recognizes none of us can avoid what he calls the “tragic triad of human existence, namely pain, death, and guilt.”5

In fact, Frankl argues that to live is to suffer and if there is a purpose in life at all there must be a purpose in suffering and in dying. The reality of suffering is individual; thus one finds out for oneself its meaning and the possibility of growth despite indignity. One learns there is always one final human freedom, the freedom to choose one’s attitude to one’s circumstances. “When a man finds that it is his destiny to suffer, he will have to accept his suffering as his task; his single and unique task. He will have to acknowledge the fact that even in suffering he is unique and alone in the universe. No one can relieve him of his suffering or suffer in his place. His unique opportunity lies in the way in which he bears his burden.”6