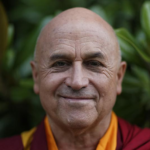 “From the point of view of absolute truth, neither happiness nor suffering has any real existence.” – Matthieu Ricard.

Our last commentator on the Buddhist interpretation of suffering is Matthieu Ricard, a Buddhist monk and son of a French philosopher.1 He tells us that lasting well-being or sutkha can be attained by recognition of the illusory quality of suffering. Buddhists believe the pervasive form of suffering stems from blindness of the mind under the grip of ignorance and selfishness. Vulnerability to this suffering leads to world-weariness and a lack of meaning, but can be overcome. I will reconfigure his thinking into three segments: (1) reality, (2) irony, and (3) cure.

We must first have a correct understanding of reality, which in Buddhism connotes the nature of things unmodified by mental constructs. The key tenet of reality is that nothing exists in and of itself; all things are related. Critically, this applies to us, that is, our belief that each of us is a separate self is false. Ricard warns us the most disruptive mental confusion or ignorance is grasping on to personal identity – the illusion of being separate from the world. We are fundamentally interdependent with others and the environment. Self is only a word, a label, a convention. No serious analysis leads to reasonable conviction that we possess a self. Consciousness is just the flow of experience with its most fundamental aspect being the pure faculty of knowing, the luminous quality of the mind.

The other main ignorance is our understanding of happiness and suffering:

(1) Pleasure is not a source of happiness as it is unstable, variable, and exhausted by usage.

(2) Egocentrism is flawed as we all depend on others for our happiness.

(3) Unhappiness is simply the way we experience our suffering, not suffering itself.

In short happiness is neither the egocentric quest for hedonistic satisfaction nor the absence of suffering, but the achievement of inner peace and wisdom.

Buddhism restructures these aspects of reality into a series of ironies.

(1)  Most importantly, suffering will always exist, but everyone has the potential for liberation from it.  Suffering is universal but not inevitable.

(2) Suffering is not incompatible with a flourishing life.

(3) We use personal identity to shield ourselves from suffering, but the opposite happens.

(4) We take for happiness that which is but a source of suffering.

Ricard describes the relief of suffering in almost psychological terms. We must learn to tone down disturbing thoughts through a gradual process of “familiarization” with the new vision of reality and of negative emotions. He specifies two methods: (1) the antidote of opposites (e.g. counter hatred with love) and (2) freeing negative emotions by contemplating them until they evaporate. At the end of the day, suffering is a state of mind; we must purge the mental toxins of compulsive desire, hatred, and so forth.  The final outcome is enlightenment which, according to the Buddha, is the ultimate freedom that comes from perfect knowledge of the mind and the world of phenomena.