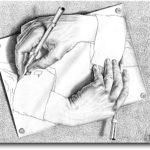 ““Beyond all doubt the great purposivenesss present in the world compels us to think that there is a supreme cause of this purposiveness and one whose causality has an intelligence behind it. But this in no way entitles us to ascribe such intelligence to that cause.” – Immanuel Kant, Critique of Judgement

What position finally emerges regarding design in and of the universe? I have  compiled Table 5 in the Appendix to consolidate the last three dozen posts. I believe the truth of science demonstrates convincingly that the universe is not the product of blind chance, nor absurd, but, like Kant, I do not believe we can ascribe an intelligence, at least of the type we know, to its origin. Rather our analysis supports the view that the universe is the result of self-organization conforming to a body of natural laws. Consequent to this organizing process emerge novel entities – sometimes themselves accompanied by new laws as in the case of life and consciousness. Superficially these products appear unpredictable, but ultimately they are deterministic.

That individual subatomic particle behavior is literally uncertain despite being statistical, leaves open a door to a creator/observer unless we accept the dubious concept of decoherence. However, if we grant that for now science and internally-focused meditation are the only two means to evaluate reality and that both are constrained by human limitations, it may simply be the case that we cannot be certain whether ‘intention’ is appropriately attributed to the construct of the universe.