Another intriguing possibility for life might be in the atmosphere of white dwarfs. These Earth-sized bodies will maintain a steady state by feeding off dark matter for perhaps 20 cosmological decades. Their outer layer, heated from below and exposed to the radiation of low energy photons should be able to sustain chemical reactions that permit life although at a slower pace (1/500th) than on Earth.4  A third opportunity for life in the Degenerate Era depends on an advanced civilization creating a spherical shell around a white dwarf to intercept its radiative energy.5

In the end all stars, star remnants, and rogue planets will wane as protons and neutrons finally decay into “a diffuse sea of radiation, mostly photons and neutrinos, with a small admixture of positrons and electrons” by cosmological decade 40.6 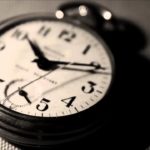 In the final age, the Dark Era, only subatomic particles remain in an immense cold. While it is possible the universe will slow to a stop  known as heat death, Adams and Laughlin favor the alternative of particle annihilation continuing as long as the universe lasts, a situation called by Paul Davies, a “universe of eternal death.”9 The also offer a more optimistic future where quantum tunneling of a vacuum energy  phase transition result in a new universe with novel characteristics.

Adams and Laughlin briefly discuss the competing view of an eventual collapse of the universe known as the big crunch in some 50 billion years, which appears likely should the universe be curved or closed rather than flat. Last in considering the enigma of how our universe happens to be so finely tuned to allow galaxies, stars, planets, and life; they espouse the theory of the multiverse. wherein there are an uncountable number of universes,  and of course we find ourselves in one allowing life simply because otherwise we wouldn’t be here to ask the question. Such a multiverse might offer hope that intelligent beings can escape our future degenerate universe, perhaps by creating a new one. 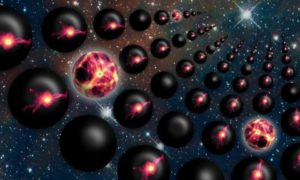 Whatever the future, they note: “The most consistent characteristic of our ever-evolving universe is change…we must seize the present cosmological epoch, the present year, and even the present day. Each moment in the unfolding history of the cosmos represents a unique opportunity, a chance for greatness, an adventure to undertake.”10 Don’t waste it!

2Adams and Laughlin discuss the extremely unlikely event (about 1 in 100,000) of the Earth being torn out of its orbit by a passing stellar object in which case the surface becomes uninhabitable due to the opposite problem of frigid cold once Earth escapes the solar system (pages 50-53).