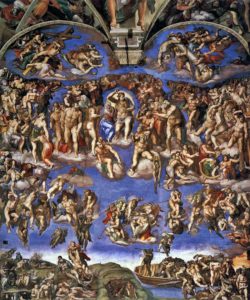 “I am become Death, the destroyer of worlds.” – J. Robert Oppenheimer (thought by the ‘father of the atomic bomb’ on seeing the first thermonuclear explosion; from Hindu scriptures).

The most famous eschatology is the New Testament book of Revelation. The Old Testament included significant end of the world prophesies within Isaiah and Daniel, and in fact Jesus as Messiah was believed by his early followers to be the fulfillment of these prophesies. However as time passed without  the Apocalypse, and after the Roman Empire tightened its grip on the chaotic province of Israel, there appeared the last book of the New Testament, Revelation, as recorded by John of Patmos (not the apostle John). 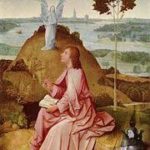 In this curious scripture, John says he heard a “great voice as of a trumpet saying, I am Alpha and Omega, the first and the last…” (Rev. 1:10-11). John is invited into heaven to witness the future where he sees are 24 elders, 4 beasts, tens of millions of angels, and a book with seven seals. Behind these seals are the four horsemen of the Apocalypse, Christian martyrs, a great earthquake, the blackened sun, the blood moon, the falling of stars to earth, 144,000 righteous members of the Tribes of Israel, seven angels who sound trumpets bringing scourges, and an army of 200,000,000 vengeful horsemen to destroy unrepentant sinners.

Victory is delayed when three beasts appear – one from a pit in the earth (Satan), the second a great red dragon in heaven, and a third from the sea. The hosts of the beast carry a mark, the number, 666. After the appearance of 144,000 virgins and the fall of Babylon, the ‘Son of man’ appears on a white cloud followed by seven plagues and the final battle of Armageddon. God is installed on his throne and Satan is cast into a bottomless pit for 1000 years. Some men are saved immediately, but after the 1000 years, the rest of humanity is resurrected.  A final conflict occurs after Satan is released, but this time Satan is cast into a lake of fire for eternity as are the men judged unworthy by God reading from the ‘book of life.’ The chosen then enter a new eternal paradise ruled by God.

The book of Revelation has been the most controversial part of the New Testament for nearly two millennia and outlasted efforts to discard it. Why does it endure and what is its metaphorical lesson? Spiritual readers including Augustine see it as the internal battle within each of us to overcome evil and achieve ethical perfection in pursuit of heaven. But for this post, we are interested in it as a myth of the destiny of man. From that standpoint Revelation appears very optimistic. The worst evils of the world are caused by free agents which for us means mankind. Highly talented but malevolent humans symbolize Satan, and destructive technology (for example atomic weapons) the beasts. We live in the period of Tribulation – the conflict of good and evil – and although it is likely evil will proliferate further, Revelation tells us the good in man will overcome his evil. If God is the origin of the universe or the universe itself, the allegorical divine paradise may be a peaceful world filled with virtuous, flourishing men.