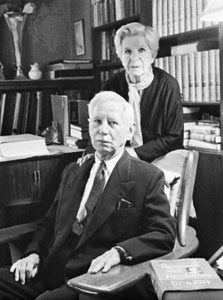 “As humanity, or at least their leaders, become more fully aware of the nature and origin of civilization and the manner in which it has hitherto developed they will discover firmer foundations on which to build, more efficient ways of eradicating the inevitable and congenial errors of the race, and of stimulating patient and fruitful reconstruction and reform” ­– J. H. Robinson, Encylcopaedia Britanica, 1929.

Our first two historians, Fiske and Toynbee, see in man’s future the elimination of conflict and warfare and a religious or spiritual enlightenment. Now we look at the last of our historians Will Durant, an atheist philosopher and anarchist in youth, who matured into the author of the remarkable 11 volume The Story of Civilization. (Much of his later writing was done with his wife Ariel.)

Durant defines progress as the “increasing control of the environment by life.”1 Civilizations transmit progress from one to another, that is, progress is not continuous or universal; but overall the average man alive today is experiencing the high point of human progress. On the other hand, the only certain thing in history is decadence just as there is nothing certain in life but death. New civilizations develop from the “slow blending of many peoples joined in the conquest of the environment.  The mixture has the same rejuvenating effect as in the conjugation of protozoa.”2 “The moral for America is obvious; our ‘blood-chaos’ is the prelude to a new people, a new stability of soul, and a new civilization.”3

Durant believes the future will depend on social institutions: educational, governmental, and religious. Education rather than pedigree or biology will transmit and extend civilization; but religion is essential because without it civilization has ‘science without wisdom’ and ‘cleverness without conscience.’

Regardless, Durant advises us not to fret about the future. No great civilization entirely dies; elements of it are transferred to the next. Man’s “precious achievements have survived the vicissitudes of rising and falling states: the making of fire and light, of the wheel and other basic tools, language, writing, art, and song; agriculture, the family, and parental care; social organization, morality, and charity; and the use of teaching to transmit the lore of the family and the race. These are the elements of civilization, and they have been tenaciously maintained through the perilous passage from one civilization to the next. They are the connective tissue of human history.”4 And because writing permits its transmission, “civilization need no longer die. Perhaps it will outlive even man, and pass on upward to a higher race.”5

Interestingly all three of our historians have optimistic views of man’s destiny. Fiske imagines the evolution of human kindness and intelligence into world peace and religious (Christian) apotheosis. Toynbee foresees a world order founded on the coalescence of religions into a common human heritage. Durant projects progress in control of nature and an increasingly rich human culture that may outlast man and be adopted by a later species. Next we look at how several great philosophers see human destiny.