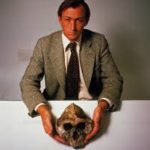 “It is deplorably anthropocentric to insist that reality be constrained by what the human mind can conceive…The limits of our mind are just not the limits of reality.” – Colin McGinn.1

It seems fitting that we begin our search for the meaning of human destiny with the view of an expert on the origin of man, the great paleoanthropologist, Richard Leakey, who echoes the maxim of his father: “The past is the key to our future.”

He starts with the simple reminder that all living humans belong to one species, Homo sapiens, with a particular evolutionary history and a particular relationship to the rest of the natural world. Humans are an accident or perhaps more accurately a chance event in Earth history. Optimistically he notes that humans appear to have evolved to cooperate; whereas violence and warfare are later cultural developments of the shift to agriculture.2

In speaking of the hominid line of evolution, he emphasizes that the “probability of a particular species going extinct is determined as much by external factors such as catastrophic change in habitat as by internal factors such as how well adapted or fit they are.”3 For example, it remains unclear whether Neanderthals went extinct by assimilation, destruction, or competition by our species.

He notes the evolution of reflexive human consciousness is the fourth great biological revolution. This led to our great creativity, but also great arrogance; to the point that we have an anthropocentric view of the world and perhaps the universe as well. He imagines that a visitor from a more advanced extraterrestrial civilization “might point out that the quality of consciousness of which we are so proud is in fact a fragile entity, a cognitive illusion created by a few neuronal tricks in the midst of gray matter.”4

In thinking about human destiny, he takes us back to the fossil record where we learn species do not last long on the cosmic or geologic time scale – about two million years for vertebrates. “Species go extinct for the most part not because they are in some way inferior, but because they succumb to the vagaries of mass extinction.”5 Our species is young, perhaps 100,000 years or so, and the periodicity of the extinction pattern suggests the next major event is not due for about twelve million years, so our prospects should be good. But a looming cause of human extinction would be humanity itself, that is, the ‘sixth extinction,’ in which case Earth’s biota will recover without humans and eventually a new intelligent life form may evolve.

He considers the alternative that humans might evolve into descendant species, but guesses this is unlikely as culture may block further evolution and genetic intervention or deliberate breeding programs would entail difficult ethical issues. But he concludes that a future Earth without humans is likely. The main lesson of his investigation for us is that we need to be better tenants of planet Earth.

It seems to me the anthropologist’s inevitability of human extinction mirrors that of our own individual deaths, but similarly does not eliminate the meaning of our species any more than mortality makes a meaningful life impossible.