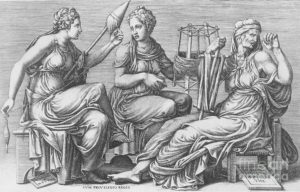 ” Dreadful is the mysterious power of Fate: there is no escape from it by wealth or war, by walled city, or dark, sea-beaten ships.” – Sophocles, Antigone.

We have discussed how humans experience life as fated and the metaphysical argument for fate. Now I would like to examine some mythical and philosophical traditions that employ fate in its various forms.

In ancient Greece, three Goddesses, cohorts of Ilithyia, the goddess of birth, were identified as the Fates or Moerae:  Clotho (The Spinner) who spins the thread of life, Lachesis (Disposer of Lots), who determines its length, and Atropos (Inevitable), who carried the shears which cut the thread at death.1 Sophocles’ play, Oedipus the King, is the epitome of the Greek sense of the unfolding of fate. Oedipus’ father abandons him as a baby after learning his son will kill him and marry his wife. Oedipus is found and adopted, and in adulthood learns of his fate to kill his father and marry his mother. Hoping to avoid this fate, he leaves his adopted family only to kill his biological father in a scuffle on the road and later marry his mother.  Fate in this tradition is predominately tragic; it seems the ancient Greeks used fate as a means to console themselves in tragic circumstances.

Fatalism reappears later in the Hellenistic philosophy of the Stoics who suggest the best approach is a calm acceptance and disinterest in one’s future, a stance they called apatheia. This approach is later incorporated in the philosophical foundations of Christianity where it was transformed into predestination which is the subject of the next post.

The Eastern world has two alternate conceptions of fate – karma and quietism – both of which are less absolute than the Greek tradition. In Hinduism, karma, or The Law of the Deed, assures causality in the spiritual world. Since rewards and punishments cannot occur within a mortal lifetime, they are stretched out over other lives. The good or bad in the present life then is based on events from prior (unremembered) lives and cannot be avoided by actions in this life. Like Greek fate, this law is above gods and men.2 Karma then is a metaphysical explanation of the unequal situations and inevitable helplessness in the present life, and suggests a continuing unpredictability of the actions of this life on the next. This dogma extends to other Eastern religions including  Buddhism.

Lao-Tzu, the great Taoist sage embraces fate more optimistically with the ethic of quietism. This philosophy encourages a man to shun human society and artificial complexity and embrace a “Stoic obedience to nature, and abandonment of all artifice and intellect, a trustful acceptance of nature’s imperatives in instinct and feeling…Quiescence, a kind of philosophical inaction, a refusal to interfere with the natural course of things, is the mark of a wise man in every field.”3 Taoism then not only refuses to resist natural fate, but finds wisdom in a detached acceptance. Here is an opportunity to see fate as beneficent rather than malevolent.

The study of myth and philosophy allow us to see that free will ultimately means our subjective experience of fate need not be absolute nor seen as  good or evil. And at least man has the good fortune to be the one earthly creature capable of recognizing, accepting, affecting, and embracing it.