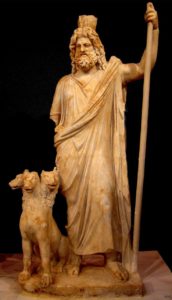 “When mind is set free from its present conditions, it appears as just what it is and nothing more; this alone is immortal and eternal.” Aristotle.1

In the last post we looked at the concept of immortality as resurrection of a particular body with its particular soul and noted the significant scientific and metaphysical objections to it. Somewhat less problematic is the third traditional connotation of immortality from antiquity, spiritual afterlife, which probably was the most common belief of ancient Western polytheistic societies and philosophers. This notion offers some comfort in the face of inevitable death by proposing individual immortality of the soul including memories, personality, and identity; the possibility of compensation for the inequities of mortal life; and moral retribution in the forms of punishment and reward.

The afterlife begins immediately after death as the soul enters another world. In ancient Greece, Hades is both the god of the nether world and the name of his domain, where the dead come as ghosts with unsubstantial life. On arrival they are judged by Minos, Rhadamanthus, and Aeacus who may assign the more fortunate to Elysium and unfortunate to Tartarus for punishment.2 This basic pattern is repeated in Rome and other European cultures.

Plato habitually takes on the subject of immortality as persistence of the soul. He has several arguments for an immortal soul; for instance he considers natural abilities as a form of reminiscing, suggesting immortality precedes current life suggesting timelessness over simple duration. In the Phaedrus, Socrates argues that the soul as ‘self-mover’ indicates immortality compared to the mortal things which are moved by another. The soul’s indivisibility is a third argument for its permanence. Perhaps strongest is his argument that if Ideas are eternal, the mind or soul which knows them must be also be eternal.

Aristotle seems more grounded, but does ponder the possibility that the intellect as soul is capable of existence in isolation of the body (see quote above). However he never speaks of an afterlife, and seems to be referring to an absence of temporality in contemplative thinking rather than disembodied existence.