“That life is worth living is the most necessary of assumptions, and were it not assumed, the most impossible of conclusions.”– George Santayana

The Spring 2019 issue of American Scholar, the quarterly magazine of Phi Beta Kappa, includes a fifty year old old essay by a 20th century historian, Jacques Barzun, with an introduction by his grandsons. It is the transcription of a lecture he gave at the University of Cincinnati, College of Medicine entitled “Man and Life” but which he called “Present Day Thoughts on the Quality of Life (1969).” 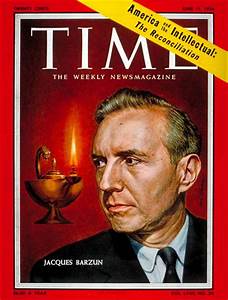 Barzun was a chronicler of the West’s decline and had been deeply affected by the horrors of the first World War that left him with a “permanent muting of the spirit.”  He matured into a humanist who insisted upon the inseparability of feelings from thought. He was deeply concerned with the individual’s interior life or ‘sense of self’ which he considered the primary determinant of one’s quality of life, and yet emphasized the role culture makes in the shape, form, and quality of our lives.

The dilemma of the 1960s according to Barzun (and perhaps our time as well) is that life seems to lack the right quality due to societal structure. Occupation becomes a rationalization rather than a reason for our desire to live. His critique of modern society describes six main problems:

1.   Social contacts are increasingly impersonal leading to alienation. Each of us begins to feel like a mere unit, manipulated by societal institutions, in a world without the manners that in earlier times served as a means of protection of the self.

2.  Work that leads to visible accomplishment has disappeared, and this is mirrored by the appearance of the failure of institutions and the state to ever solve problems.

3.  Democratic competition and envy manifests as the repeated need to justify one’s existence, resulting in excessive self-consciousness that distorts reality as we become “spectators in our own life.”

4.  Secularism and equality limit life goals which leads to discounting of heroism and greatness, and dismissal of spiritual or religious life.

5.  The historical success of the great human movements for democracy and equality left us without major societal causes within which individuals can find meaning.

6.  Because most modern change is superficial rather than fundamental, there is only an illusion of change. He offers as evidence the thoughts of John Rushkin who predicted our misery of self-contempt and Thomas Carlyle who foretold the paralysis of social action.

Barzun worries that modern thinkers believe the solution to these problems can be engineered – genetically, psychologically, or politico-economically, but he disagrees pointing out that problems of human affairs rarely have such solutions. Many individuals instead default to neoprimitivism or drug-induced withdrawal.

He concludes that as a historian, his task is not to predict the future, but whatever it may be “What is certain is that the desire not for life alone, nor for brutish life, but for a special quality in life will not cease, even for the last shivering inhabitant of a devastated planet. That desire is planted deep, and it seeks its fulfillment, which is what makes humanity other than animal.”